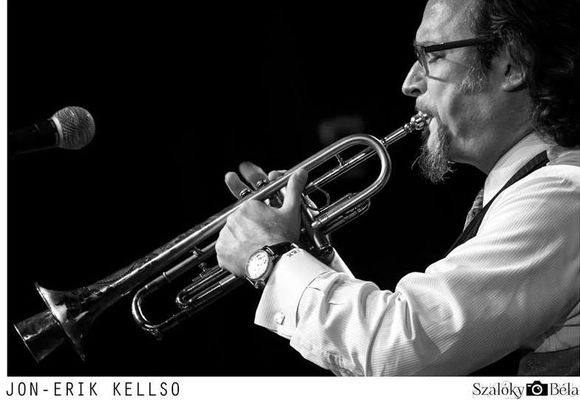 Trumpeter Jon-Erik Kellso started playing professionally in and around Detroit, Michigan where he was born in 1964. Jon began early, playing in a big band at age 11, in the International Youth Symphony at age 13, and in a concert alongside cornetist Wild Bill Davison at age 17. Kellso played with a wide variety of groups there, including the J.C. Heard Orchestra.

In '88 Jon-Erik joined James Dapogny's Chicago Jazz Band with whom he's made appearances throughout North America, concertized on PBS TV, and recorded extensively.

Recent engagements include a week at Dizzy's with Wynton Marsalis' Louis Armstrong Continuum playing Pops' Hot 5s and 7s;  various appearances on Garrison Keillor's "A Prairie Home Companion" live Public Radio International show, including a live cinecast to movie theaters everywhere with Elvis Costello; several jazz fest at sea cruises; concerts at the Kennedy Center in Washington, D.C. with John Lithgow; tours of the U.S. and Japan with Ken Peplowski's Kingdom of Swing big band; annual appearances in jazz clubs and festivals in New Orleans; and jazz parties, festivals, and concerts all over the world.

At home in New York Kellso has been leading The EarRegulars with guitarist Matt Munisteri and various guest mo-fos at the Ear Inn on Sunday nights since 2007. On Mondays and Tuesdays Jon plays with Vince Giordano's Nighthawks at Iguana just off of Times Square. Aside from these steadies, Jon can also be seen performing at all the great NYC venues, including Small's, Birdland, Dizzy's, the Blue Note, Fat Cat, the Jazz Standard, etc.

Jon has recorded several times on Arbors Records, including three CDs as a leader and three with cornet legend Ruby Braff. Jon pays tribute to Braff on his "Remembering Ruby" CD, on Gen-Erik Records. His latest recording, which features Evan Christopher, is entitled "Jon-Erik Kellso and the EarRegulars: In The Land of Beginning Again," on the New Orleanian label Jazzology.