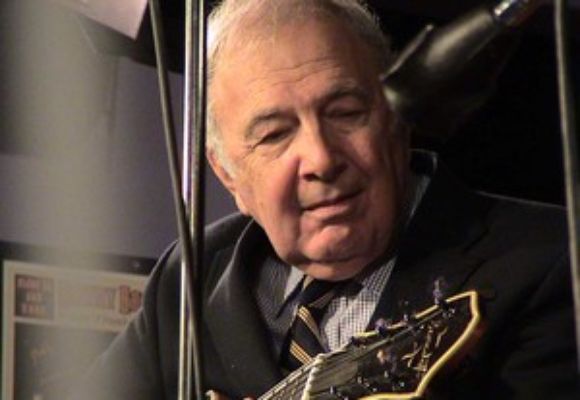 John Paul 'Bucky' Pizzarelli (born January 9, 1926 (age 82)) is an American classical jazz guitarist and banjoist, perhaps most notable for his work with jazz guitarist John Pizzarelli, his son. John has also worked for NBC as a staffman for Dick Cavett (1951) and also ABC with Bobby Rosengarden in (1952). The list of musicians Bucky has collaborated with over his career is considerable, including Les Paul, Stephane Grappelli, and Benny Goodman. Bucky acknowledges Django Reinhardt, Freddie Green, and George Van Eps for their influences on his style and mode of play.

John Pizzarelli was born January 9, 1926 in Paterson, New Jersey, learning to play the guitar and banjo at a young age. His uncles (Pete and Bobby Domenick) were professional musicians, and sometimes the extended family would gather at one of their homes with their guitars for jam sessions. Of course when Bucky learned the tricks of the trade, he frequently joined them. His first guitar was an archtop Gibson, an expensive instrument at the time. During high school, John was guitarist for a small band that performed classical music.

John began his professional career at 17 when he joined the Vaughn Monroe band in 1943. Near the end of World War II, while in Austria as an infantryman fulfilling wartime military service for the Army, Pizzarelli was absent from Monroe's band (though he rejoined the outfit in 1946 and played for another 5 years with them). While in the military, he played in an unauthorized dance band. In 1964, he became a member of the Doc Severinsen band on the Tonight Show while Johnny Carson was host. Bucky also was on the Katie Smith Show that same year. During his time spent performing for the Tonight Show, Bucky accompanied guest bands and musicians playing through a landscape of musical genres. While self-professedly not a big fan of rock and roll, Bucky performed on 7 hits with Dion and the Belmonts during this period and enjoyed the sessions.

From 19561957, John performed with The Three Sounds trio along with bassist Andy Simpkins and pianist Gene Harris. He toured several times off and on with Benny Goodman up and until 1986, the year of Goodman's death. Beginning in the 1970s, Pizzarelli began recording as a leader, performing many tributes to musicians of the 1930s era. Bucky has performed at the White House in Washington, D.C. with artists such as Benny Goodman, two performances for President Ronald Reagan and one for President Bill Clinton. He also played a private birthday party for Pat Nixon, President Richard Nixon's wife, at the Nixon home.

Jersey Jazz Guitars was the name of a 1985 concert held at the Rutgers University Nicholas Music Center in New Brunswick. The ticket featured Bucky, Les Paul, Tal Farlow, and Bucky's son John. The concert was aired on New Jersey's PBS station as part of their 3-part New Jersey Summerfare Series. Bucky and Les Paul had performed together before with one another, as they were neighbors and cordial friends. The show aired for one hour in August of 1985, with son John adding his vocals on two selections.

In addition to his son John, Bucky's son Martin Pizzarelli and daughter Mary are also professional musicians. Martin is a bassist who has recorded both with his father and brother. Mary is a classical guitarist who appeared on her father's second album as leader titled Green Guitar Blues, as well as other recordings. Pizzarelli has also appeared on three albums of his daughter-in-law (John's wife), Jessica Molaskey. Today Bucky Pizzarelli resides in a home on the banks of the Saddle River in Saddle River, New Jersey with his wife Ruth. An avid amateur painter, Pizzarelli's home is filled with his own artwork.