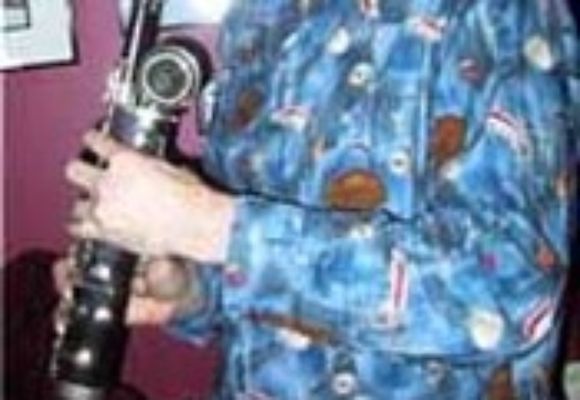 One of today's most wide-ranging instrumentalists, Scott Robinson has been heard on tenor sax with Buck Clayton's band, on trumpet with Lionel Hampton's quintet, on alto clarinet with Paquito D'Rivera's clarinet quartet, and on bass sax with the New York City Opera. On these and other instruments including theremin and ophicleide, he has been heard with a cross-section of jazz's greats representing nearly every imaginable style of the music, from Braff to Braxton. Scott has been heard numerous times on film, radio and television, and his discography now includes over 165 recordings. His four releases as a leader have garnered five-star reviews from Leonard Feather, Down Beat Magazine and other sources worldwide. The newest, Melody From the Sky (featuring the seldom-heard C-Melody saxophone), was recently the subject of a Wall Street Journal article by Nat Hentoff.

A busy traveller, Scott has performed in some thirty nations, recently completing tours on five continents in a three-month period. He has performed at Carnegie Hall, at the Village Vanguard, at the Smithsonian Institution, and for the President of the United States. Scott's group was selected to be the closing act at the Knitting Factory's Sun Ra Festival in New York City. Scott has also written magazine articles and liner notes, and was an invited speaker at the Congressional Black Caucus Jazz Forum in Washington, D.C.

Scott was selected by the US State Department to be a Jazz Ambassador for 2001, completing an eight-week, eleven-country tour of West Africa performing his arrangements of the compositions of Louis Armstrong (later featured on his CD Jazz Ambassador).

The son of a piano teacher and a National Geographic writer/editor, Scott Robinson was born on April 27, 1959 in New Jersey, and grew up in an eighteenth century Virginia farmhouse. While in high school, he received the "Louis Armstrong Award", and the "Best Soloist Award" from the National Association of Jazz Educators. In 1981, he graduated from Boston's Berklee College of Music, and a year later became, at 22, Berklee's youngest faculty member.

Since moving to New York in 1984, Scott has been awarded four fellowships by the National Endowment for the Arts, and participated in a number of Grammy-nominated recordings. He has been profiled in upcoming editions of the Encyclopedia of Jazz and Grove's Dictionary of Jazz. A recent 4 minute CNN program featured Scott and the giant contrabass saxophone which he used on his CD, Thinking Big. Scott was also the winner of a recent Downbeat Critics Poll under miscellaneous instruments (talent deserving wider recognition).

A respected performer in all areas of jazz, from traditional to avant-garde, Scott Robinson has arrived at his own unique musical voice which, as once described in a Northsea Jazz Festival program, "combines solid foundations with great daring".