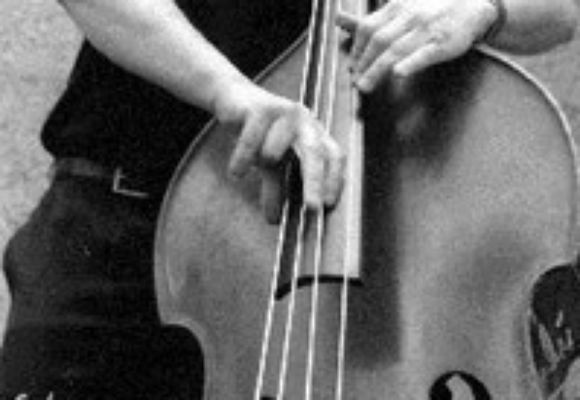 David Ruffels holds a Master of Music Degree from the State University of New York at Purchase, New York, as well as a Bachelors in Jazz Performance from William Paterson University in Wayne, New Jersey, both internationally acclaimed jazz study programs.

While at William Paterson, David studied bass and improvisation with Rufus Reid and Dr. Todd Coolman. He continued his acoustic bass studies with Dr. Coolman while attending S.U.N.Y. Purchase, New York.,as a Master of Music degree candidate in the spring of 2002.

Dave began his jazz studies at the University of Connectictut with Ellen Rowe, and had his musical beginnings at West Hill H.S. in Stamford Ct., with Fred Pasqua.

Moving to Manhattan in 1995, David's freelance career as a jazz bassist in New York City has opened the doors to many exciting musical adventures!

One recent project : from the spring of 2003 until the spring of 2005 he performed regularly with Israeli musicians Dekel Bor and drummer Nadav Snir as a member of the Dekel Bor Trio, working in New York City as well as touring throughout the East Coast. They recorded the CD: Stories and Tales, and spent time working with the grammy award winning producer Robert Sadin.

Another recent recording project was the CD*: Contrast to the Madness, with the InSpirit Quartet, a group Dave founded in the winter 2003 with saxophonist Derrick James. The quartet also includes guitarist Scott Hesse and Drummer Ernie Colon. Contrast to the Madness is the group's debut CD comprised of 10 original compositions written and arranged by the members of the quartet. The CD was produced by Todd Barken, artistic coordinator for Jazz at Lincoln Center in Manhattan, New York.