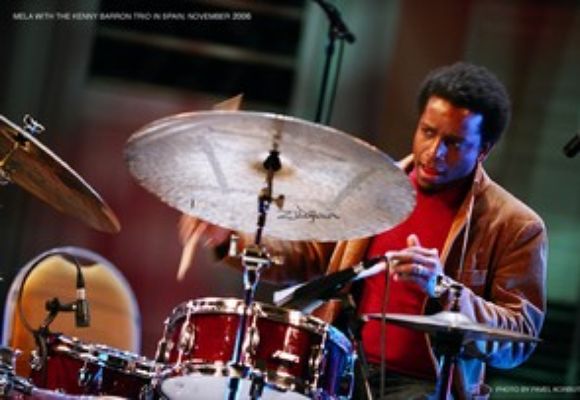 Francisco Mela and the Crash Trio

Recently featured in the Zildjian Add in "Modern Drummer," "Down Beat," & "Jazz Times." The Afro-Cuban jazz composer and bandleader drummer, Francisco Mela, born in Bayamo, Cuba. At the age of seventeen, he started at the Music School of Arts "El Yarey" where he took classes of "Classic" and "Afro-Cuban" popular music in percussion instruments. A year later after he got his Diploma, started working as a percussion teacher in Rafael's Cabrera Conservatory of Music in Bayamo, Cuba at the same time he enrolled in the National School of Arts for Teachers el "CENCEA" (Centro Nacional de superaci..n de la ense..anza art..stica) where he got a degree in Music and Percussion. While he was in Cuba, he met one of the best contemporary Latin Jazz Piano player's Emiliano Salvador, who invited him to be part of his quartet "Nueva Visi..n" and that's when he started his career as a Professional Musician. After a year the quartet split and then he met Gabriel Hernandez, another piano player, that was Mela's first performance at the "Jazz Plaza" one of the best Jazz Cuban's Festival in Havana, organized by Chucho Valdez. Right after Mela and Gabriel were invited to play in the "Cancun Jazz Festival" where he shared stage with Tito Puentes, Mongo Santa Maria, Dave Valentin, etc. In 1997, he created his own band "MelaSon Latin Jazz Band" which had a unique sound and it was invited to play all around Cancun. Mela moved to Boston in 2000 and became the house drummer of Wally's Cafe Jazz Club, one of the most important in Boston area. In this place he started developing his own sound and became the band leader of a Latin Jazz Quintet. At the end of 2001 he became the former drummer of "Jane Bunnette and Spirits of Havana," they went touring all around the US, Canada and Europe, giving workshops and clinics in different universities. When they came back, they recorded the Grammy Nominee Album "Cuban Odyssey." In 2002 he started teaching drums and percussion classes at Berklee College of Music, one of the most important Jazz Music University in the world. His music as a drummer has been influence by Jose Luis Quintana (Chango), Roy Haynes, Elvin Jones, Thelonious Monk, Tony Williams, Miles Davies and some others. He has performed with many jazz great musicians, including Kenny Barron, Joe Lovano, Paquito D'Rivera, George Garzone, John Patitucci, John Scofield, Jane Bunnett, Kenny Werner, Larry Grenadier, Jason Moran, Mark Turner, Stefon Harris, Regina Carter, Lionel Loueke among others... Recently he appeared on August, 6 2005 at the Caramoor Jazz Festival introducing "Joe Lovano Presents Francisco Mela and the Berklee All-Stars Quartet". "Today Francisco Mela is one of the most important Cuban's drummer in jazz" --Jazz Times