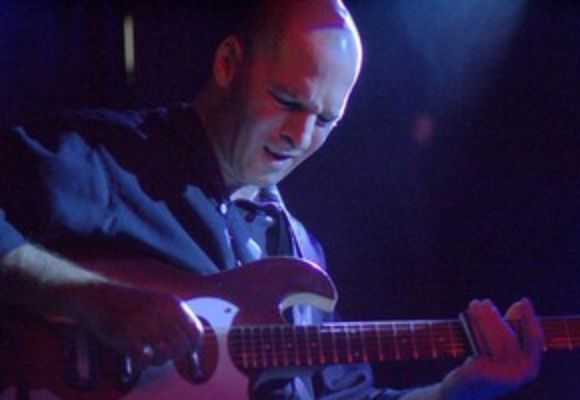 DAVID R. TRONZO David Tronzo has devoted most of his life to music since he first became mesmerized by it as a youthful rock-influenced teenager in the summer of 1972. He has literally and figuratively traveled far from his beginnings in rural Rochester, New York, where he was born in 1957, steadily honing his skills as a self-taught student to his modern-day evolution to becoming a world-renowned slide guitar musician and teacher. Tronzo has received the distinction of being voted one of the Top 100 Guitarists of the 20th Century by Musician Magazine (September, 1993 issue). In addition, the pundits in New York City bestowed their long-time resident (1979-2002) with more accolades (Best Guitarist in N.Y.C.-1993 by the New York Press). Musician Magazine honored him with the distinction of being one of the Top Ten Jazz Guitarists. Tronzo's unquenchable thirst for mastering his craft has provided him with a diversified taste in music, which can be seen in his unique playing style. Essentially, Tronzo envisions a style ranging widely in emotion and technique, weaving freely through all of the music he plays. The result is a startlingly innovative body of extended techniques for the slide guitar for which he is credited with creating: fluid single lines, finger-behind-the-slide chords, and harmonic slaps, using unconventional slide accoutrements such as plastic cups, rags, pencils and wires. His inventiveness as a slide guitarist has been the subject of two doctoral candidates' ethnomusicology theses in Germany (1995 and 2001). In February 2002, critic Laurence Donahue-Greene credited Tronzo as being a pioneer of the modern slide guitar. (Open Ears column, allaboutjazz.com) Tronzo has toured extensively in Europe and the United States, gracing the stages of the most renowned international music festivals in the world. He has teamed up with acclaimed musicians in various duos and projects under his name (Tronzo Quartet/Tronzo Project), as well as others. He is linked with some of the most famous names in musicianship (e.g., David Bowie guitarist Reeves Gabrels and Michael Blake). Tronzo's slide guitar can also be heard in the soundtracks to director Robert Altman's film Shortcuts and Marco Brambilla's Excess Baggage. He has also recorded and toured with Wayne Horvitz and The President, John Hiatt, John Lurie and The Lounge Lizards, John Cale, Marshall Crenshaw, Foday Muso Suso, Hassan Hakmoun, Gavin Friday, The Jazz Passengers, Mike Manieri, and David Sanborn. Most recently, Tronzo was nominated as one of thirty musicians worldwide to receive the CalArts/Alpert Award in the Arts for music. He is currently residing with his wife Kelly and their cat, Fred in Newmarket, New Hampshire. He is touring and recording in a solo format as well as with The Tronzo Trio (new CD release pending), The Tronzo/Herbert Duo with bassist Peter Herbert, and a new project V-16 with drummer Jerry Granelli, bassist Anthony Cox and guitarist Christian Kogel (new CD release pending). Since 2001 Tronzo has been a frequent collaborator with Boston-based dub-jazz collective Club d'Elf, and can be heard on several of their CDs, including 2006's Now I Understand (Accurate), 2004's 100 Years Of Flight (Kufala) & Gravity All Nonsense Now (Kufala), which also features fellow Berklee Prof Dave "Fuze" Fiuczynski. He features prominently (along with John Medeski & Duke Levine) on their upcoming release, Perhapsody (Kufala), due June 19, 2007. Here's a video from Club d'Elf at the Stone Church, New Years Eve, 2006/2007