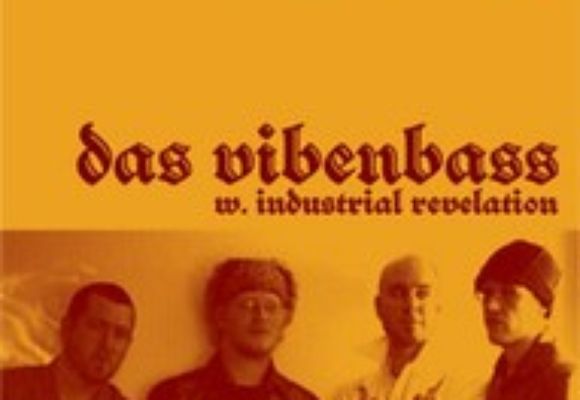 From Los Angeles to Berlin, audiences have been captivated by the musical sound of Das Vibenbass. The groups independently released debut, Animals and Robots, sold over 1,000 copies in a mere six months. Sustaining a spot in the top fi ve of Seattles KEXP 90.3 jazz charts for over 5 months, the quartet was then nominated, alongside Wayne Horvitz, for Best Jazz/Experimental act in the Seattle Weeklys Best of 2006. Tours of the United States, Germany, Austria and the Czech Republic have spawned a devoted fan base whose discriminating tastes welcome only the best into clubs. Venues include Seattles Triple Door, Hamburgs Birdland and The Tunnel in Vienna.

This quartet continues to amaze audiences with their precise, uncompromising timbre. Geoff Larson and JC Bockman structure the groups prime sensibility with flooding bass and raucous drums, respectively. Josh Clifford lends his versatile tenor saxophone to passages that require both ferocity and elegance, while Justin Sorensen assertively haunts the sound with his contemporary approach on the vibraphone.

Das Vibenbass seeks to challenge the borders of jazz today, and their new album Fodakis is evidence that they intend to be an important voice for many years to come. Das Vibenbass....Crushing the Borders of Jazz

Geoff Larson has been playing the upright bass for 42.3% of his life. Needless to say, he thinks fondly of this instrument. In fifth grade, he thought being the next John Coltrane sounded like a great idea but as soon as he heard a room full of aspiring Tenor Sax players, he immediately walked out and began his exploration of Mozart, Bach, Vivaldi, Shubert, Wagner, etc&. That's what bass players must do. Diane Newell says it best "One Five, One Five, 1, 5, 1 5...." It tends to be a little more complicated but she has the right idea! They all wrote the bass part on the bottom of the chord. Quite simply, the bass just makes you move. Music is hard without it. Geoff graduated from Western Washington University with a degree in classical performance. He studied classical music with Anna Doaks, and Ben Musa. He also honed his Jazz skills with Chuck Isreals and learned a lot about his instrument and the things it could do. Geoff's first compositions came under the tutelage of Roger Briggs and this bred his original music to its own daring peak. Geoff has been writing original music for bands such as By the Way, Soup of the Day, Yah Muzz, and Das Vibenbass for years. His collaborations with Justin Sorensen, Don Hopwood, Jeff Sanders, Cameron Newell, Ben Jahn, and many other top artist who have been invaluable. You can see him playing classical, Jazz, Bluegrass, Hip-hop, Rock, and sometimes Country. Geoff kind of has a thing for music. In Das Vibenbass he acts as the glue between melody and rhythm. He forces the "dirty" groove onto the Melody's with his bass lines. His connection with the musicians in the group can be felt and heard through the "primal screams."

Justin Sorensen is a graduate of the University of Washington where he earned his Bachelor's Degree in Music, emphasis on Ethnomusicology. While studying there he had the privilege of working with many jazz greats such as Marc Seales, Doug Miller, Ben Thomas, Bob Rees, Eddie Palmieri and Bill Frissell. All have been instrumental in his growing passion and progression towards his study of music. Justin is currently an active part of the Seattle music scene, performing with several groups that include Soup of the Day, Das Vibenbass, By the Way and Yah-Muzz. He has stretched his repertoire to include everything from jazz to bluegrass to rock to classical music, all the while creating and maintaining a fresh voice that keeps audiences coming back for more. Pushing his expansion even further, Justin has more recently become involved in several dance projects, composing music for, and collaborating with, local choreographer Michelle Miulli. Their work has premiered at Meany Hall and will go on tour this summer. Throughout his career, Justin has performed at virtually every notable venue in the Seattle area as well as touring nationally to high acclaim. He has played percussion and vibraphone with local artists Dyne Eifertson, Greg Campbell, Stuart Hambley, The Eulipions, Joel Ricci and Evan Flory-Barnes to name a few.

A graduate of Cornish College of the Arts, Josh Clifford has an expansive repertoire that has accounted for him playing in numerous ensembles. These range from 'straight-ahead' bebop of the 40's and 50's to fusion of the 70's to burnin' Latin jazz. In 2001 Josh was invited to join the prestigious Northwest Jazz Orchestra led by Jim Knapp. A prominent member in the orchestra, Josh gained invaluable experience playing such challenging pieces composed by Knapp. In addition, Josh has studied with famed jazz saxophonists Hadley Caliman, Denney Goodhew, Jay Thomas, flutist Paul Traub, and spent three years examining jazz theory and improvisation with pianist Randy Halberstadt, trombonist Julian Priester, and Latin genius Jovino Santos-Neto. With this wealth of musical knowledge in so many different genres, Josh's career has been able to emerge and evolve into what it is today. He is constantly tweaking his own sound to create a fresh, unique voice on the sax unparalleled by others in the jazz community. Because of his originality and driving force to invent something new, Josh has led a myriad of jazz groups, from duos to septets, to perform in every notable club in Seattle and several theatres around the world. He continues to play privately, weddings, parties, and festivals and has toured extensively with funk/rock bands Lemongrass, My Funktional Family, Flowmotion and LaPush.

JC Bockman began playing music at the age of seven while living overseas in Europe. His musical journey originated with the piano and the saxophone, and eventually progressed to drum set. Carrying with him is his unique ability to sit down at the drums, drive a band, and do it all, armed only with a few small pieces of wood. JC graduated from Indiana University in 99 before making his trek to the Great Northwest (he thought this was the best place to spend the Armageddon). Upon his arrival in Seattle, JC's love affair with the drums began to flourish. In '00 he was accepted into the Seattle Drum School and there studied with prominent musicians Steve Smith, Jason McGere (Death Cab for Cutie), and Ivo Nakov. JC has been at the forefront of creation for such bands as PKE Meter, Soup of the Day, and Brooter, as well as guesting with several others in the Seattle Metroplitan area. Until the lounge singing career takes off, he is devoting most of his time as of late to the charismatic quartet Das Vibenbass and the ever evolving Bad Dream Good Breakfast. His favorite style to play is 4 on the floor (laughs) but his repetoire also includes groove, dirty jazz and indie/prog rock. The presence of JC in Das Vibenbass has brought this band to new levels. His entrance into the group pushed their Jazz to the "dirty" side of groove. You can listen to him crushing the beat anytime Das is playing.