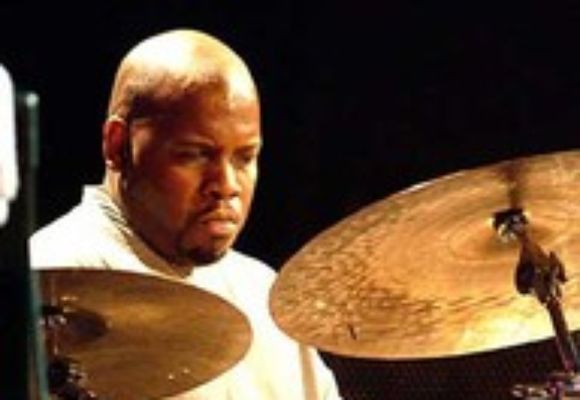 Jazz musicians all over the world are likely to be aware of drummer Gene Jackson's talent and expressive performances. While Roy Haynes, Philly Joe Jones, Elvin Jones, Billy Higgins, and Tony Williams were some of his drumming influences, Jackson has a style that can change in accordance to what genre of music he plays. His ability to range from African to Latin to Cool rhythms have afforded Jackson the opportunity to be recommended by dozens of eminent musicians since his career took off 15 years ago. Jackson was born October 16, 1961 in West Philadelphia, Pa. Though he grew up as an only child, Jackson began to focus on music with the help of his guardian's grandson, Greg McDonald who played the drums. "(Greg) would have rehearsals with a band of excellent musicians, which helped inspire me early on," Jackson said.

In 1979, Jackson, who had the ambition to become a professional drummer as soon as he picked up the sticks, went to Boston to attend the well-renowned Berklee College of Music. In the five years Gene spent at Berklee, he counted among his peers and classmates: Walter Beasley, Branford Marsalis, Mark Whitfield, Monty Croft, Donald Harrison, Cindy Blackman, Terri Lynn Carrington, Billy Kilson, Jeff "Tain" Watts, Marvin Smitty Smith, Cyrus Chestnut, Danilo Perez, Dave Kakowski, Jovan Jackson, to name a few. Jackson also lived in an apartment with saxophonist Branford Marsalis, with whom he had established a good friendship. When Branford moved to New York City, fellow drummer Marvin "Smitty" Smith became Gene's roommate.

Though he has maintained a successful career, Jackson's Berklee ties helped boost his way to becoming a professional when Jeff "Tain" Watts and vocalist Lenora Helm recommended him to guitarist Kevin Eubanks. Jackson recorded and toured with Eubanks while still living in Boston, and then moved to New York 1987 to continue playing with Kevin. "Working with Kevin Eubanks was pivotal in helping my career take off."

By playing with the many musicians, he has acquired the ability to play the skins in multiple styles and genres of music. "I learned early on that adapting to the various musical situations would be essential to my survival," said Jackson. "I found it is musically satisfying for me when I follow where the music takes me as opposed to dictating where the music goes."

Jackson began working with Herbie Hancock in the fall of 1991 after he was recommended by drummer and good friend Terri Lynne Carrington to do a tour with The Herbie Hancock & Wayne Shorter Quartet. Gene continued his association with Herbie until 2000. Although this group did not record officially, in Gene's opinion, "It was one of the hottest groups in Jazz. Not because of my involvement!" Gene says, " But because of the mastery and science that Herbie Hancock brings to the music in addition to mastery of bassist Dave Holland. I had the honor of witnessing this magic night after night for years and I still can't believe it was not officially documented.".

Herbie Hancock's groups toured the globe extensively from 1993 -2000 and despite numerous personnel changes, Gene was always in the drummer's chair. From 1993-95 the Herbie Hancock Trio highlighted the fat groove of bassist Jeff Littleton. The next Trio (95-96) was with master veteran bassist Dave Holland. This group pushed the boundaries of the traditional jazz trio. It was during this period that Gene developed at good musical relationship with Dave Holland. Gene then began touring and recorded with Dave Holland's band.

Through out the herbaceous period of Gene's career he continued to work in many situations. When he wasn't working with Hancock, Jackson became a member of Michele Rosewoman's Quintessence, Robin Eubanks Mental Images Group, Jorge Sylvester's Music Collage and The Mingus Big Band.

Since 1999 Gene has been involved in various projects around the world. On numerous occasions Gene has toured and recorded with Germany's NDR Big Band under the direction of various conductors including composer arranger Peter Herborn which featured compositions and performances by tenor saxophonist Gary Thomas. A highlight in 2000 was a concert at the Montréal Jazz Festival 2000 featuring Clark Terry, and most recently a radio broadcast with Grammy nominee vocalist Carla Cook with arrangements of stellar tenor saxophonist, arranger, vocalist Lance Bryant.

Jackson also recorded and toured with premier German tenor saxophonist Christof Lauer. The record released in 2000 was became the Number 1 jazz record in Germany. The group comprised of French tuba player Michelle Godard and Marc Ducret on guitar with Anthony Cox on bass.

Jackson and and fellow Philadelphian bassist Christian McBride were the rhythm section for the Thelonious Monk Institute of Jazz Piano Competition at the Kennedy Center in Washington D.C. in 1999. Coincidentally the winner and runner up Eric Lewis and Orrin Evans were Philadelphia area musicians.

To sum up some of Gene's work abroad in 2001: The Mingus Big band toured Switzerland, France and Germany, The Orrin Evans trio toured Italy, Sicily, Spain and Malta. Vocalist Claudia Acuna performed in Finland, a musical review, " Fire at Keaton's Bar and Grill" featuring Elvis Costello performed in London and Manchester England and Rotterdam, Holland. Jackson also toured with Italy's premiere jazz pianist Antonio Farao in Switzerland, Italy and Germany. The band also recorded a CD which will be released sometime in 2002.

Gene also worked with veteran bassist Stafford James and toured Vienna, Brussels, Frankfort and a performance for Radio France in Paris. They also recorded in Köln, Germany at WDR studios which will be released sometime in 2002.

Now, when he is not performing or recording, Jackson teaches privately at The Aaron Copland School of Music at Queens College in New York City. Jackson has also given workshops and private instruction at Drummers Collective in New York for numerous years and a workshop at Eastman University in Rochester, NY. He has taught overseas as well, with Germany as a frequented location; including at the Drummers Institute in Douseldorf, at Musik-hochschule in Hamburg and at Folkwang-hochschule in Essen. He also teaches at a very successful program in the Alps of Austria every year call Project Outreach.

His work as teacher has made Jackson proud of his protégés. He says of his instructing role, "It has been very rewarding, especially when I help the student see that many of the answers they look for are in themselves." Teachers that have been important to Jackson's development are Greg McDonald, Robert Zollman, John Ramsey, Lenny Nelson, Alan Dawson, and Sam Ulano.