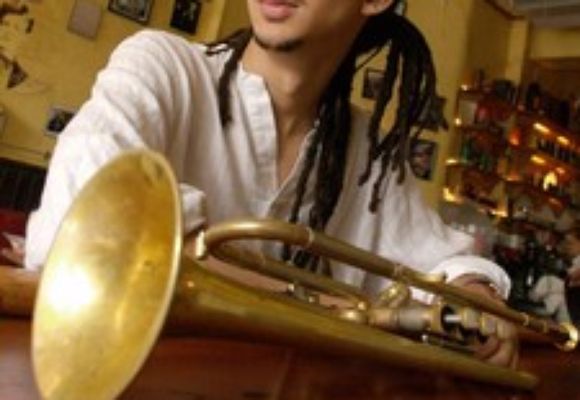 In his early 20's, Theo has already distinguished himself as a vital force in the jazz community. As the grandson of jazz trumpet legend Doc Cheatham, Theo's legacy is profoundly felt when he plays. His musicianship possesses a depth that can usually only be achieved through a lifetime's worth of experience.

Theo is a graduate of the Oberlin College Conservatory of Music in Oberlin, Ohio with a B.A. in Jazz performance. At Oberlin Theo studied under the guidance of legendary trumpeters Donald Byrd & Marcus Belgrave, as well as Wendell Logan, Gary Bartz, Billy Hart, and Robin Eubanks. While in the midst of his studies at Oberlin,(before his 21st birthday) Theo performed professionally with legendary artists such as Louis Hayes and his Cannonball Adderley Tribute Quintet (at Dizzy's Club Coca Cola at Lincoln Center). He was a featured artist at the 2005 JVC Jazz Festival at Jazz at Lincoln Center's Rose Hall, sharing the stage with jazz legends Clark Terry, Jimmy Heath, Frank Wess, Benny Powell, and others. He was also a featured artist at the 2005 Windsor Jazz Festival, the 2005 Aspen Snow Mass Festival at the Wheeler Opera House, feature performer for the 2005 Highlights in Jazz series at the Tribeca Center for Performing Arts in New York City, and special guest with Nicholas Payton at the 2005 New Orleans Jazz Festival, (as well as leading his own quintet on countless performances in Cleveland, Detroit, & NYC).

In the spring of 2006, Theo received the Presser Music Foundation Award. With this grant, Theo recorded his first album The Fundamentals in New York City with his band The Theo Croker Sextet. Each band member is equally as impressive as the next. All in their early 20s, they define the ambitious and highly skilled lions of this generation. The album includes 10 tunes all of which he composed and arranged. The Fundamentals is being played all over the world in places such as: Australia, The Netherlands, London, Quebec, New Zealand, Italy, Switzerland, Greece, Ukraine, Germany, Portugal, Scotland, France, Poland, Columbia, Turkey, and the Central Republic of Africa. Those who have listened to the album have been overwhelmed and impressed by Theo's musicianship. Amongst these people is legendary trumpeter Donald Byrd, who was compelled to write in response:

"There are good, great and nice musical players, but then there are phenomenal instrumentalist such as Theo. I would place Theo in a class of musicians who will redirect the flow, change and alter the current of today's New Jazz. Theo has the ability and the intelligence to challenge the direction of Nu Music. Theo is one of today's titans. He is a Sankofa". (Donald Byrd is a multi-Grammy-winning composer and recording artist.)

Theo's unrelenting desire to grow as an artist has taken him into the realm of other genres. In addition to his love for Jazz music, he writes and produces hip-hop, rap, film scores, and contemporary classical, as well as many other forms of music. He is not limited by genres. Marcus Belgrave states: "Theo Croker is one of the most promising and creative trumpeters on the horizon today and is also one of the most energetic artists I have ever encountered".

Theo's life is fueled and driven by music. He expresses his freedom, creativity, and adventurousness through his work as a composer and performer. His horn acts as conduit of his true emotions. The intensity of his playing captivates and surprises audiences everywhere he performs. He not only believes in himself, but is believed in by some of the greatest musicians alive. "He has the tools, the intelligence, the ability and the talents. The future looks bright for Croker". -Wynton Marsalis.