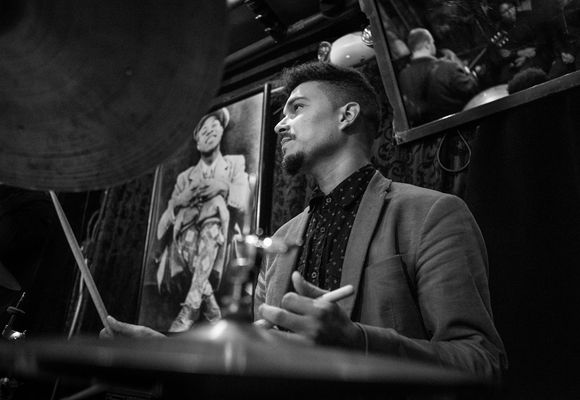 Native New Yorker Charles Goold, is one of the city's hardest working jazz drummers of his generation.  Son of Ned Goold, legendary saxophonist whose credits include Harry Connick Jr, Jack McDuff, Vernell Fournier and many others, Charles was able to hear, live and embody jazz from the day he was born.  Charles has also performed with a variety of musicians since playing professionally at the age of 14.  Under the tutelage of his father, Charles was able to get "real" jazz education from an early age, playing weekly at Smalls with his father and going to see and study legendary bebop drummers such as Leroy Williams, Jimmy Lovelace, Jimmy Wormworth and Billy Kaye, not to mention Goold's first gig was playing at Arturo's with great pianist Harry Whitaker. Goold recently graduated from the Juilliard School all while continuing to perform in New York City.  With this precious knowledge and experience handed down from his elders and pursuance of formal education, Goold has been able to perform with of the best in the jazz industry and wide variety of acts from classic stalwarts like John Hendricks, The Cab Calloway Orchestra and Andy Bey to more contemporary acts like Johnny O'Neal, Steve Nelson and a concert with Tony Bennet, Ne-Yo, Savion Glover and Brandon Flowers of the Killers at the 2015 Tribeca Film Festival, collaborations with rap legends Talib Kweli and Ghostface Killah along with performing on the Off-Broadway Musical "Old Hats."