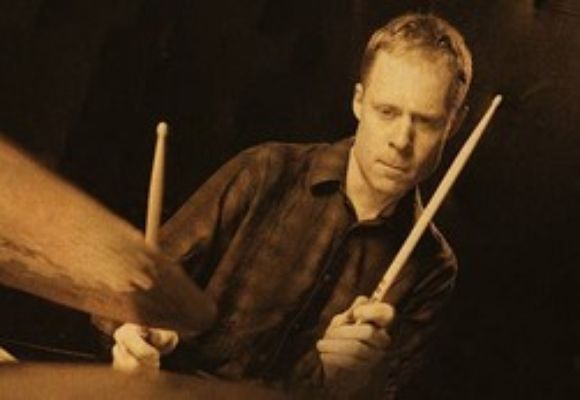 Stewart grew up in Des Moines, Iowa listening to his parents' jazz and rhythm and blues records without much exposure to live jazz in the then relatively isolated state of Iowa. The largely self-taught drummer began playing at the age of seven. While in high school, he played in a Top 40 cover band and the school orchestra, and went to a summer music camp at Stanford Jazz Workshop where he met jazz legend Dizzy Gillespie. After high school graduation, Stewart attended the University of Northern Iowa in Cedar Falls, Iowa, playing in the jazz and marching bands as well as the orchestra. He then transferred to William Paterson University (then William Paterson College), where he played in ensembles directed by Rufus Reid, studied drums with Eliot Zigmund and Horacee Arnold and took composition lessons from Dave Samuels. The young drummer met future employer Joe Lovano while still in college (the two played duets in lieu of a drum lesson when Zigmund was away). He also made his first recordings, with saxophonist Scott Kreitzer, pianist Armen Donelian, while still in school, and with pianist Franck Amsallem (with Gary Peacock on bass) in 1990.

After college, Stewart moved to New York where he quickly built his reputation, first gaining wider recognition in John Scofield's quartet and in a trio with Larry Goldings and Peter Bernstein, which has become the longest running group Stewart has played with, having begun in 1989 and continuing to this day, however infrequently the group may be found in performance. Stewart's musical horizons expanded when legendary funk saxophonist Maceo Parker tapped the budding drummer upon seeing him with Larry Goldings at a regular gig at a club in Manhattan. Stewart worked with Parker from 1990 to 1991, touring and recording on three of Parker's albums. The association led to Stewart's memorable gig with the great James Brown, who told Stewart that there "Ain't no funk in Iowa!" upon learning the drummer's roots. Musical associations with Lee Konitz, Michael Brecker, Pat Metheny and many other notable jazz musicians have followed.

As a drummer, Bill Stewart's playing is distinguished by its melodic focus, and its polyrhythmic, or layered, character. To say his playing is "melodic" means there is a sense in which one can "hum along" to his solos, as there is a clear sense of melodic construction. His improvisations favor the development and layering of motivic ideas over the raw generation of excitement or display of technical prowess. Stewart has great touch, or dynamic precision, so that his ideas are articulated with a pleasing exactness and clarity. He has also achieved a very high degree of independence of his limbs, so that not only the ride and the snare/toms, but also the bass drum and hi-hat, are free to participate as melodic "first-class citizens." His drumming bears the influence of various melodic drummers who preceded him, including Max Roach, Art Blakey, Roy Haynes, Tony Williams, Jack DeJohnette and Al Foster.

As a composer, Bill Stewart is forward-looking, and seems not to want to repeat what others have already accomplished. In other words, his tunes have a bit of an avant-garde flavor. The melodies, harmonies, phrase lengths, and measure lengths are often altered so as not to conform too closely to traditional jazz language. Some of his tunes (such as "Mayberry") also feature a built-in "free blowing" section, surrounded by a composed "head" (in the case of "Mayberry", a parody of the theme song of the Andy Griffith Show.) The concept of "Mayberry" may have been borrowed from Stewart's long-time collaborator John Scofield, who has written many tunes of the same general shape.

Stewart has a considerable output as a leader, beginning with 1989's Think Before You Think, with bassist Dave Holland, pianist Marc Cohen, and saxophonist Joe Lovano, on which the drummer led a session of originals and standards, including one of his own compositions.

In his next outing as a leader, Stewart assembled trumpeter Eddie Henderson, saxophonist Lovano, pianist Bill Carrothers and bassist Larry Grenadier for an entire record of Stewart compositions, Snide Remarks, which was chosen as one of the top ten jazz CDs of the year by Peter Watrous of the New York Times.

The second Blue Note album to be released under Stewart's name was 1997's Telepathy, featuring Carrothers and Grenadier along with saxophonists Steve Wilson and Seamus Blake.

In 2005, the Bill Stewart Trio, with Kevin Hays and Larry Goldings, released Keynote Speakers. The ensemble is a twist on the usual organ-guitar-drum trio, where a second keyboard (variously piano, Fender Rhodes, and other keyboard instruments) is added to the organ-drum foundation.

Stewart's recordings all have a certain unique blend of playfulness and mystery propelled by his thoughtful drumming and equally melodic and rhythmic compositional style. Stewart has said that he thinks it very important to find an interesting combination of musicians whose abilities will complement each other and who will sound at home on the compositions slated for the given session.

Stewart recently completed a creative collaboration with the Avedis Zildjian Company in developing the Special Dry Complex Ride cymbal, which is meant to replicate the sound of an old K. Zildjian cymbal Stewart has had for a long time. Stewart says of the new cymbals, "[They] are very pretty, yet can be very nasty."