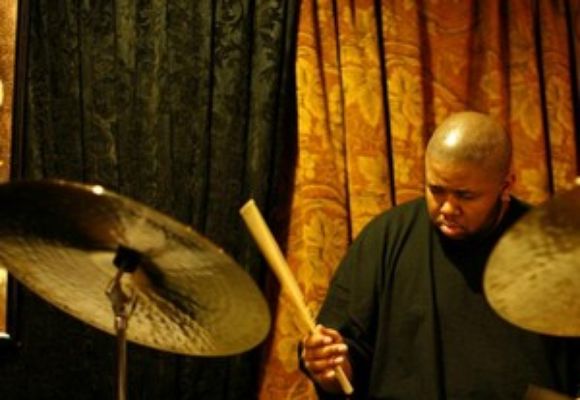 Born on 8 July 1980, multi-instrumentalist Tyshawn Sorey is fast becoming a vital voice in New York City's jazz and creative music scene. Originally self-taught in composition, piano, trombone, and percussion, he has worked with chamber ensembles and collaborated with a diverse array of musicians, including Muhal Richard Abrams, Ray Anderson, Wadada Leo Smith, Steve Coleman, Peter Evans, Mario Pavone, Ellery Eskelin, Dave Douglas, Mark Helias, and Butch Morris, among many others. Sorey's debut release THAT/NOT (Firehouse 12) baffled many critics, becoming one of 2007's most critically acclaimed recordings. He is also co-leader of the collaborative trio Fieldwork (with Steve Lehman and Vijay Iyer) whose album, Door, is receiving critical praise. Tyshawn is on the faculty of Brooklyn's School of Improvisational Music and the Jazz and Contemporary Music Department at The New School for Social Research. He has received grants and commissions from the Van Lier Fellowship and Roulette Intermedium, most recently for a multi-chapter work in progress entitled "Wu-Wei." Other critical accolades include nominations for Up And Coming Artist and Drummer of the Year from the Jazz Journalists Association and Rising Star Artist and Rising Star Drummer from Downbeat magazine.