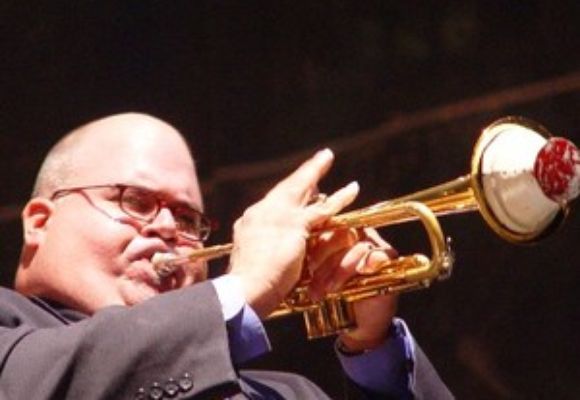 Dan Miller was born in Waukegan, Illinois on May 31,1969 to John and Virginia Miller. He began playing the trumpet in grade school with the encouragement of his father. Growing up, he would listen to records with his father (including Miles, Dizzy, Chet, Maynard, Basie and Sinatra) which helped him form the idea of what jazz trumpet should sound like.

He studied with Nick Drozdoff and Gary Slavo while growing up in Chicago, but points to two specific events which helped him to pursue jazz trumpet. First, he met Bobby Shew in Chicago in 1984. "Hearing Bobby was a revelation to me. He blew sensational bebop and such swinging lead trumpet, that I felt that here was a musician that can do it all. Bobby is also one the finest teachers in the world. His down to earth approach puts the student at ease, and allows them to quickly grasp his innovative ideas." Second, was a meeting the same year with Tom Harrell at a Jamey Aeborsold jazz clinic. Harrell was just there for one day, but "he came into the trumpet master class with Hal Galper and proceeded to tear through Cherokee, rhythm changes and the blues in all 12 keys. I sat five feet away from the front of his bell, enamored by that big, burnished sound and thought that this is what I wanted to do."

He went to North Texas State University in 1987, where he began studies with teacher Don Jacoby. Jacoby, acknowledged as one of America's finest brass instructors, was able to convey his complex concepts to anyone at any level, and Miller spent many days studying with and just being around the legendary teacher. "Jake" treated his students like family, and his love of music and teaching made his students work with abandon. Miller also studied with John Haynie at North Texas. Haynie was another tremendous teacher and soloist, who helped Dan refine his playing from a technical standpoint.

Miller left North Texas in 1989 to join the Woody Herman Orchestra. In January 1990 he met Harry Connick Jr. in Dallas, and Harry told him of his plans for a new big band. By June of that year the band was on the road, and it would take him all over the United States, Canada, Europe, Japan and Australia. He also began working with Maynard Ferguson in 1991 (for three months during a break with Connick). Miller moved to New York City in November 1991 with his brother, trombonist David Miller. The tour with Connick lasted almost two and one half years. He returned to Maynard's band in September 1992 for a tour of the U.S., Europe, Japan and India. Connick re-organized the big band for a world tour from April 1993-January 1994. Miller spent August 1994 with Wynton Marsalis's Big Band at Tanglewood, MA recording and filming the Marsalis on Music project. He continued free-lancing in NYC with various artists including Wynton Marsalis and the Lincoln Center Jazz Orchestra, Frank Foster and Jon Hendricks. In December of 1995 he rejoined Harry Connick Jr. and his new funk band, which toured until May 1997. In June 1997 Miller began a fourteen month stint with Tom Jones criss-crossing the United States and returning to Europe and Australia. Connick returned to the big band format and Miller rejoined to record a new album and tour from 1998 until 2000. During his time with Harry Connick Jr., Dan Miller appeared on four of his albums: Blue Light Red Light, When My Heart Finds Christmas, Star Turtle and Come By Me. Miller also appeared on three of Harry Connick's television specials that are available on VHS and DVD: Swingin' Out Live, The New York Big Band Concert and When My Heart Finds Christmas.

Dan has spent 2000 thru today free-lancing in New York City and throughout Florida. He has also been teaching and doing clinics and adjudications for the Yamaha Music Corporation as a Yamaha Performing Artist and Clinician. In 2004, Dan began to split his time between NYC and Florida and began performing at Ellington's Jazz Bar and Restaurant on Sanibel Island where he has led his own group as well as worked with Jimmy McGriff, David "Fathead" Newman, Lew Del Gatto, Jon Weber and Davell Crawford. Since 2005, Dan has been a member of the Danny Sinoff Quartet, recording three CDs for E.S.P., most recently Ellington's Presents: The Danny Sinoff Quartet featuring David 'Fathead' Newman. He has also been working on a biography/oral history of Fats Navarro, with a companion volume containing transcriptions of his entire recorded output.