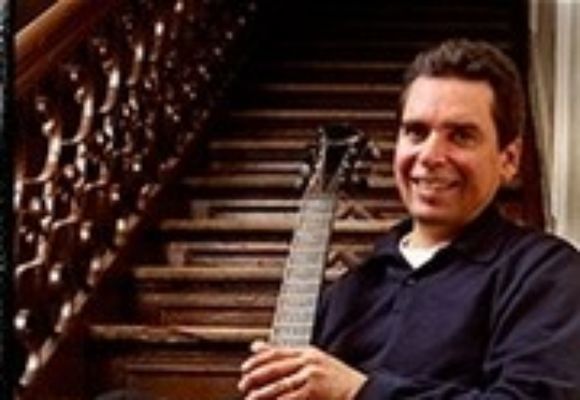 "He may be the best of his generation," writes Owen Cordle in JazzTimes. George Kanzler of the Newark Star Ledger proclaims that he is "the most impressive and creative member of a new generation of jazz guitarists." And Chip Deffaa of the New York Post observes that he is "...one of the very finest young guitarists working today."

It seems that the only thing regarding Howard Alden on which the critics have debate is whether the remarkable jazz guitarist is one of the best or simply the best.

Born in Newport Beach, California, in 1958, Howard began playing at age ten, inspired by recordings of Armstrong, Basie and Goodman, as well as those by guitarists Barney Kessel, Charlie Christian, Django Reinhardt and George Van Eps. Soon he was working professionally around Los Angeles playing in groups ranging from traditional to mainstream to modern jazz. In 1979, Alden went east, for a summer in Atlantic City with Red Norvo, and continued to perform with him frequently for several years.

Upon moving to New York City in 1982, Alden's skills, both as soloist and accompanist, were quickly recognized and sought-out for appearances and recordings with such artists as Joe Bushkin, Ruby Braff, Joe Williams, Warren Vache` and Woody Herman.

Howard Alden has been a Concord Jazz recording artist since the late '80s where his prolific recorded output as leader, co-leader, and versatile sideman, has captured an artist of consistently astonishing virtuosity and originality.

One of the many highlights in Howard Alden's fruitful association with Concord Jazz came in 1991 when, at the urging of Concord President, Carl Jefferson, Alden recorded with one of his all-time heroes, seven-string guitar master George Van Eps on the album Thirteen Strings .

As a result of his associating with - and inspiration from - George Van Eps, Alden has been playing the seven-string guitar since 1992. The seven string guitar imparts a greater range and harmonic richness to Alden's already colorful tonal palette, as evidenced on three remarkable follow-up albums with Van Eps, his critically acclaimed duo recordings with saxophonist/clarinetist Ken Peplowski, and the stunning interplay between Alden and special guest Frank Wess on Your Story - The Music of Bill Evans . Alden also teamed up with fellow guitarists Jimmy Bruno and Frank Vignola to record a three guitar outing entitled The Concord Jazz Guitar Collective , which was quickly called by some critics "an instant classic!"

Alden's recording from 1996 Take Your Pick serves to underline Howard's wide scope of knowledge of jazz literature. Thoughout the disc, one is amazed at how skillfully Alden delivers interpretations with fresh surprises. Michael Moore, Bill Goodwin, Lew Tabackin, and Renee Rosnes combine with Alden to bring exciting interplay and thrills around every corner to the ten standard and lesser known gems hand picked for this recording. Released in honor of Concord's 25th anniversary was a duo recording with Jimmy Bruno, Full Circle teamed with the very first Concord recording Jazz/ Concord featuring Herb Ellis and Joe Pass.

Howard can be heard on the soundtrack to the 1999 Woody Allen movie "Sweet and Lowdown", starring Sean Penn, who was also nominated for an Academy Award for his role as a legendary jazz guitarist in the '30s. Howard not only played all the guitar solos, but also coached Mr. Penn on playing the guitar for his role in the film. The London Observer has this to say about Alden's new solo CD, My Shining Hour ; "If there is such a thing as a complete jazz guitarist, then Alden is it. Only a real virtuoso can sustain a whole CD of solo guitar with the aplomb he displays here." In 2004 Howard was the guitarist(and musical director) chosen for an all-star line-up commemorating the 50th anniversary of the Newport Jazz Festival, touring 50 cities of the United States in addition to their appearance at the Newport Festival. The 2005-2006 season saw Howard adding his acoustic guitar voice to violinist Mark O'Connor's Hot Swing on his national concert tour.

Howard Alden was voted "Best Emerging Talent-Guitar" in the first annual JazzTimes critics' poll, 1990, and "Talent Deserving Wider Recognition" in the 1996, 1992, 1993 and 1995 Downbeat critics' poll. As jazz critic Wayne Thompson writes simply, in Jazzscene, "If there are better young jazz guitar players in America than Howard Alden, I have yet to hear them." Howard's growing base of loyal fans couldn't agree more.