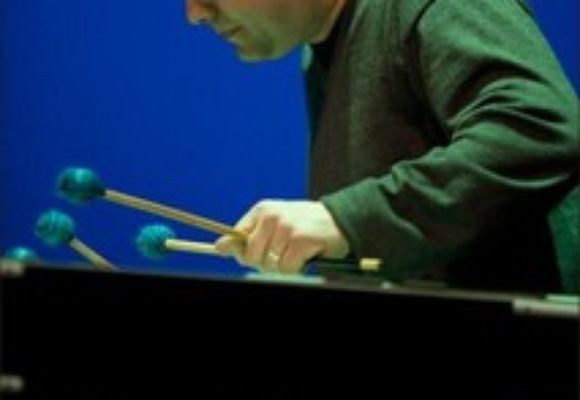 The Norville Trio The music of Red Norvo

Born in 1968 in Maryland, Beckham graduated from Boston's Berklee College of music in 1990 where he studied with Gary Burton, Ed Saindon, Hal Crook, and others. Beckham resides in Brooklyn, NY where he is an active performer and teacher.

As a band leader and composer Beckham has released three CD's to date: Suspicions(Fresh Sound New Talent, 1999) Center Songs(Apria, 2006), and the latest, Rebound (Apria, 2008). Critics and fans have taken note, describing Beckham as ...a superior conceptualist.(AMG), playing the instrument with ...a full range of expression. (Baltimore Magazine), and ...incredibly mature.(KKJZ). Jazzreview magazine noticed, writing That's what makes it work: it feels like a band. The Village Voice noticed too, writing The vibraphonist likes to keep an eye on harmonic options when he's penning intricate pieces for his poised little outfit. Further summing-up Beckahm's approach, Rhapsody.com hit the nail on the head when they wrote Beckham's approach is reminiscent of older band leaders like Paul Motian and Chico Hamilton, but Beckham's work has a sound all its ownwhich is what jazz is really about.

He is a member of George Schuller's Circle Wide, whose 2008 release Like Before, Somewhat After(Playscape) has received rave reviews for it's treatment of Keith Jarrett's so-called American Quartet material in addition to it's 2004 release Round About Now(Playscape) which also showed Beckham as a capable sideman. Beckham also is a member of composer Joseph C. Phillips' Numinous ensemble which performs original new' music informed by the stylings of Steve Reich and Morton Feldman. He has also performed and recorded as a featured soloist with the Boston Modern Orchestra Project (BMOP) in a series of recordings of Gunther Schuller's visionary work which was released in June 2008.