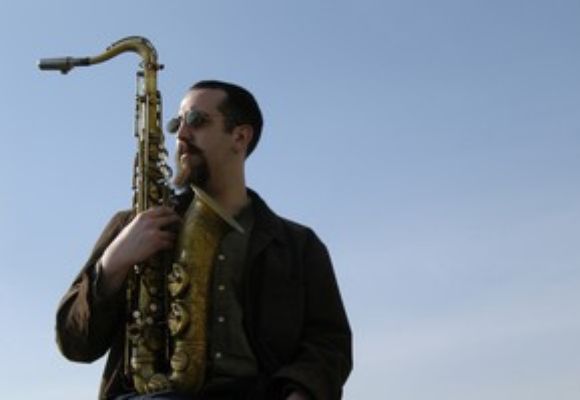 Adam Niewood (Saxophonist, Improviser, Composer, woodwind mouthpiece technician) grew up in Glen Ridge, New Jersey. The son of Gerrard (known as 'Gerry Niewood,' a jazz saxophonist and woodwind doubler) & Gurly Niewood (classical pianist and clarinetist), he had an early start in music. By the time Adam was five years old, he had tagged along with his "Old Man" on two world tours with Paul Simon & Art Garfunkel, and Liza Minnelli.

"It was an interesting transition going from traveling with my parents and a major popular touring act that played in front of thousands of people every night - to attending Kindergarten..."

"As a junior in highschool, I got the great opportunity to play 2nd tenor in a Big band including: Lew Soloff, Don Menza, my father Gerry, Steve Gadd, etc... under the direction of Chuck Mangione, for a short tour... That was all I needed to convince me that I wanted to go to music school, and play all the saxophones professionally."

Adam is a student of Berklee College of music, William Paterson University; where he earned his Bachelors degree in Music performance. From 2000  2003 Adam was the professor of Saxophone, Jazz History, and small Ensembles at Montclair State University. In 2001 Adam was chosen as one of the first 18 students to attend The Juilliard School of Music's fledging Jazz program. "The program was not right for me. It was very time consuming, and I was still trying to teach at Monclair University in addition to my workload at Juilliard. I only attended one year."

Adam left the faculty at Montclair in September 2003, after being awarded an MSM scholarship that covered 100% of his tuition to attend Manhattan School of music. He graduated with a Masters Degree in Jazz Performance in May 2005.

Adam met Drummer Bill Goodwin at an IAJE conference in New York. Bill had worked many times with Gerry, and took a liking to Adam right away, and started calling him for gigs. For the longest time, any playing I would do was in a practice room, in School, or an informal jam session. Meeting Bill led to many professional performances and recordings that helped to shape my sound and overall approach to playing music. One has to have certain experiences on the "bandstand" to really learn how to perform. I'm very fortunate that a seasoned professional was patient enough to take me under his wing. We have played countless gigs together, in numerous band configurations including: Bill Charlap, Jim McNeely, Rufus Reid, Warren Vache, Vic Juris, Steve Gilmore, Gene Bertoncini, etc. All situations I wouldn't have found myself in, if not for Bill. He is a fabulous musician and I've learned a lot about playing music from him. He is also a fabulous producer of fine Jazz recordings."

On March 18, 2003, Adam released his first recording on the Native Language label with the collective group SBW. Later in 2004, Adam co-produced along with Bill Goodwin a CD for his father Gerry entitled "Facets"; and Bill also produced "Introducing Adam Niewood" his first record as a leader with Eric Lewis on Piano, Matt Brewer on Bass, and Ben Perowsky on Drums, released June of 2004.

Attempting to help the Jazz scene in NYC, Adam booked a couple of clubs: Cynthia's (a restaurant/club that has unfortunately gone defunct); and the "Penang" Malaysian restaurant on 71st street and Columbus Avenue.

"Booking clubs proved to be a very time consuming task. While I loved giving gigs to my favorite musicians and having great music for no cover in New York, I felt that time spent booking was taking away from my own development as a composer and player..."

Currently Adam is enjoying riding the "rollercoaster" of playing original experimental music in New York; Finding a balance between traveling with many different bands playing clubs, and presenting clinics at schools across the country. While also spending time at home writing music and playing it with the numerous musicians who live in this artistic epicenter that is NYC& Aside from Adam's own project "The Rabble Rousers," you can hear Adam as a sideman with Bill Goodwin's different bands, Grupa Janke Randalu (a collaboration between Estonian Pianist Kristjan Randalu and drummer Bodek Janke of mixed heritage Kazakhstan/Poland), Nathan Peck's The Voip, Scott Reeves, Id Trio, Matt Brewer, etc. It all depends on the day.

*After the death of Adam's friend Jon Van Wie (an expert saxophone mouthpiece refacer and technician) in April of 2003& in combination with Adam's frustration with the quality of modern woodwind mouthpieces  Adam learned to reface and customize his own mouthpieces, which he plays. "I found Jon's teacher (Ted Klum) and started an apprenticeship&"