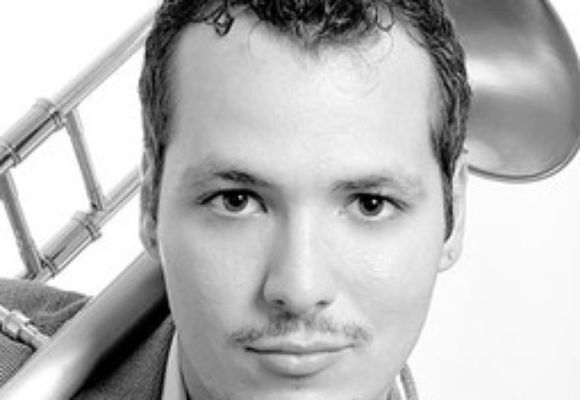 Michael Dease has emerged as one of the premier jazz trombonists of his generation.

Born in Augusta, Georgia, the “Deep South”, Dease played the saxophone and trumpet before choosing the trombone. He was a self-taught high school senior, when he moved to New York in 2001 to study at the Juilliard School where he earned his Bachelor and Master degrees.

Dease quickly established his reputation as a soloist and sideman, recording 4 albums as a leader and logging over 100 sessions as a sideman, all before the age of 30. His 4 critically praised releases as a leader include: The Takeover (2005), Clarity (2007), Dease Bones (2008) and Grace (2010). His latest album, Coming Home, to be released on D Clef Records, May 21st, features a stellar lineup of band mates: pianist Renee Rosnes, bassist Christian McBride, drumer Ulysses Owens Jr, and saxophonist Steve Wilson, plus a guest appearance by tenor sax man Eric Alexander.

He is a Grammy award-winning trombonist, and has played with many of today’s foremost jazz orchestras, including those led by Wynton Marsalis, Christian McBride, Roy Hargrove, Nicholas Payton, Charles Tolliver and Rufus Reid. He has revitalized the trombone’s image on the frontline of quintets and sextets lead by masters musicians like Winard Harper, Renee Rosnes, Bill Charlap, Claudio Roditi, The Heath Brothers and Lewis Nash.

Michael’s singular teaching talent has resulted in invitations to host master classes and residencies at University of North Texas, Scranton University, University of Iowa, Florida State College, Broward College, and many institutions abroad. He teaches jazz trombone full time at Michigan State University, well known for its jazz program, and has also been on faculty at Queens College CUNY, The New School and Northeastern University.

Aside from leading his own quartet, quintet and sextet, Dease conducts his own 17-piece big band loaded with young talents like Tim Green and Coleman Hughes, plus heavy hitters Rodney Whitaker, Greg Gisbert and Tom “Bones” Malone.