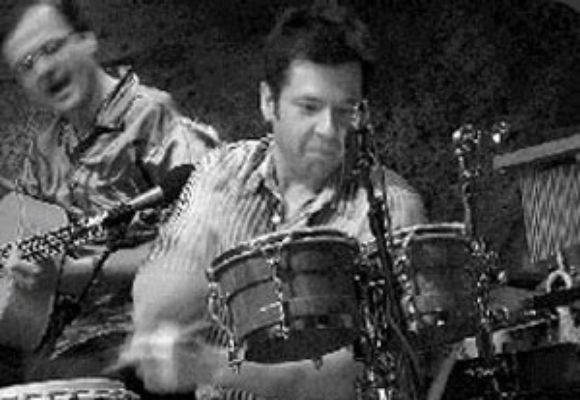 Except for two years of studio work on the West Coast in the late 1980s and worldwide touring, drummer Joe Ascione (b. 1961) has remained close to his Brooklyn, NY, birthplace. "I enjoy the immediacy of Manhattan and the music scene here," he recently said on the phone from his East 62nd Street home.

As a freelancer, Ascione has fired up plenty of jazz combos and big bands, and also performed with pop/rock stars Noel Redding (former bassist to Jimi Hendrix), Donald Fagen (of Steely Dan), and Dr. John. Last year, Ascione toured with the Horde Festival, playing in a power rock trio with guitarist Eric Schenkman (Spin Doctors). Of such gigs, Ascione says, "There's not a hint of ding-ding-da-ding in the room. All of this is bash-crash, and I have to wear earplugs and tape my hands, otherwise they fall apart."

The drummer has appeared on nearly 60 albums as sideman, but few as leader. On his recent Arbors label debut as leader, Post No Bills, Ascione's tasteful chops enkindle his well-chosen sidekicks -- pianist Dave LaLama and bassist Tim Givens, and guests Jerry Weldon (tenor sax) and Ron Affif (guitar). They understand Ascione's penchant for polyrhythms and odd-metered tunes, and deftly sail together through American Songbook gems and add dash to jazz standards.

Ascione grew up in a musical family and began playing drums at age 2. His parents were impressed that he could keep a beat at a young age and bought him his first drum set at age 4. He was playing professionally by the time he was 12 and, as a teenager, served as a roadie for Buddy Rich. Growing up, he initially listened to pop music. "But as soon as I learned the drum part, I got bored," he says. "Then I started hearing Gene Krupa and Buddy Rich, and Jo Jones and jazz drummers who kept things a little more interesting for me."

While Ascione enjoys the challenge of improvised music, he doesn't wish to be labeled solely as a jazz drummer. (He doesn't want to be considered as a jack-of-all-trades, either.) Still, his playing is unique. Ascione heightens his dazzling polyrhythmic style with an enhanced traps setup. He adds a left-foot Gajate pedal that fires a bracket-mounted cowbell, and, in addition to his left-mounted high-hat cymbal, uses a right-mounted X-hat cymbal.

As an Endorsee of GMS Drums, Zildjian Cymbals, and Promark sticks, Joe is also very involved with the education and musical cultivation of today's youth giving workshops, clinics, and master classes with whom he shares his experiences.