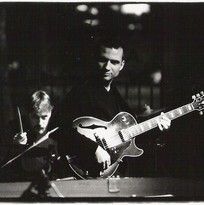 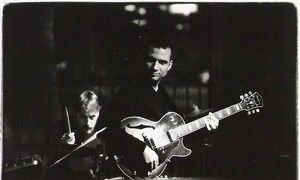 12/27/2008
Smalls
The Tony do Rosario Quartet
Upcoming Shows
Jazz Guitarist, Tony do Rosario grew up in the Atlantic City area of southern New Jersey and has been performing for audiences for over a decade. Tony's appreciation for music came at an early age growing up in a family whose culture celebrated the art and spirit of music.During his younger years, Tony visited his parent's native country of Brazil where he recalls finding his love for life and music. "There was this Samba band that would rehearse down the street, I remember feeling the energy of the music." Tony also enjoyed watching his grandfather, a self taught musician, perform on the accordion for the family. By age eight Tony was expressing his own desire to create music and with his parent's support, was playing the guitar by age twelve. Several years later a neighbor, Tom Ferguson, introduced Tony to jazz. Tom had played with legendary musicians such as Nat King Cole and Dizzy Gillespie. Tom's stories and experiences not only enlightened Tony but inspired him to evolve from his rock and roll heroes to jazz, where he found his true musical identity. "I love the way it makes me feel and how music provokes emotion."By his late teen's Tony was frequenting jazz clubs throughout Atlantic City. He began performing with local musicians at places like Rosa's Jazz Club and the Kentucky Avenue Jazz Festival. "I was just sitting in but that was okay, I saw these as opportunities to learn."Tony's desire to pursue jazz full-time sent him packing, and in 1993 he relocated to Los Angeles. While in L.A., Tony organized jazz guitar clinics and during these clinics had the opportunity to play such legendary artists as Andy Summers, Pat Martino, Howard Alden, Peter Bernstein, Phil Upchurch and Ted Greene. Tony's perseverance, commitment and talent led to performances at some of L.A.'s major jazz clubs including the Baked Potato and Catalina's Bar and Grill. Tony has also been featured in John Pisano's "Guitar Night", a series of weekly shows for top L.A. guitar players. John Pisano acknowledges, "Tony is one of the most promising young jazz guitarists on the L.A. jazz scene today." " The L.A. Times Jazz Review said "...he is a hard-core traditionalist, solidly tapped into his roots in the styles of guitarists such as Jim Hall and Joe Pass."Tony's other accomplishments include performing at New York's world famous Birdland, Chris's Jazz Café in Philadelphia, Fascing in Stockholm and an LA concert series entitled "Tony do Rosario and his Six String Friends", during which he shared the stage with the likes of Ron Echete, Jimmy Bruno, John Pisano, Paul Bollenback, Mundell Lowe, Jack Wilkins and Howard Alden.Today, Tony resides in Chicago Il. where he teaches at Old Town School of Folk Music. At the Old Town School, Tony teaches private and group classes such as, Intro to Jazz Guitar, Jazz Guitar Skills 1 and Skills 2, Chord Melody Ins and Outs, and Kind of Blue for guitar. In January 2008 Tony released his new CD, The Welcoming on Philadelphia's independent jazz label, Dreambox Media. In December 2008 he will record a new CD for the new Jazz by Subscription Label Chicago Sessions. The group for the recording is Tony's New Chicago Jazz Quartet featuring Origin recording artist Geof Bradfield on sax, Nathan Kawaller on bass, and drummer Greg Wyser-Pratt. Tony continues to perform in Chicago and throughout the world.weblinks:www.tonyguitar.com