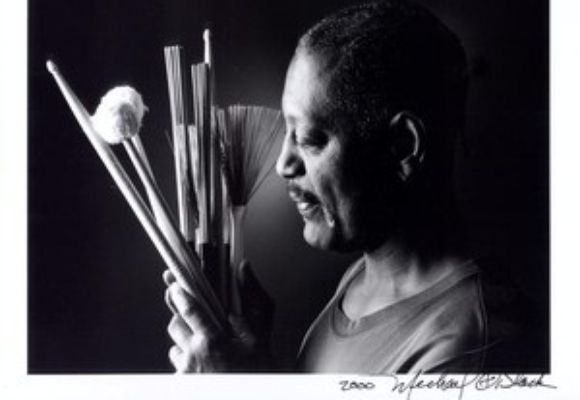 Internationally acclaimed drummer and composer Victor Lewis was born on May 20, 1950 in Omaha, Nebraska. He started studying music when he was ten and a half years old. He began on the cello because he was too small for the acoustic bass, but switched to the drums a year and a half later after watching the local drum corps marching on the Fourth of July and other holidays. He also studied classical piano which is when he learned how to read music.

Lewis began playing drums professionally on the local scene at the age of 15. Because few of the older drummers in Omaha could read music, the young percussionist was called up for a variety of commercial jobs, including jingles, the Bob Hope Show, even the circus. At first Victor's style reflected his attraction to the big band drummers he had seen with his father and heard on records, but after hearing a record of Miles Davis' Quintet with Tony Williams things changed. He began exploring Williams' sound and the styles of other great small group drummers like Art Blakey, Kenny Clarke, Max Roach and Philly Joe Jones. Soon afterwards he started his own small group to play around town. His first job with a nationally known jazz musician was accompanying Hank Crawford in Omaha.

After he graduated from high school Victor enrolled in the University of Nebraska as a music major. There he studied classical percussion because the school had no jazz program. He left Nebraska to go to Minneapolis with a cabaret show to earn enough money to move to New York and year later, on September 16, 1974, he arrived in the jazz capital of the world with $200, a suitcase and his drums.

On Victor's first gig in Manhattan, a night at Boomer's with bassist Buster Williams' group, he met trumpeter Woody Shaw. Lewis joined the trumpeter's band and a few months later, he made his recording debut on Shaw's classic, The Moontrane. The drummer also began making his mark on the burgeoning fusion and pop jazz scenes, providing the beat on records by Joe Farrell, Earl Klugh, Hubert Laws, Carla Bley and David Sanborn. It was on Sanborn's lps that Victor's compositional skills were first exposed to the public. They recorded Victor's "Seventh Avenue" and "Sophisticated Squaw" (a/k/a "Agaya") on their first outing together and Sanborn would call on Lewis' writing talents again in the future when he recorded "The Legend of the Cheops."

Sanborn wasn't the only one to notice Victor Lewis' writing abilities. Woody Shaw, one of jazz's most widely acclaimed composers called upon Lewis to contribute compositions to the trumpeter's albums for Columbia Records. Victor was soon busy performing with Woody all over the U.S. and the world. He remained with the trumpeter for the next several years, developing his talents as a jazz drummer. On his one brief hiatus from Shaw's group, he toured with tenor great Dexter Gordon and recorded on his landmark Sophisticated Giant album.

In 1980, Victor left Shaw's group to join another tenor giant, Stan Getz, beginning an association that would last up until the saxophonist's death in 1991. Lewis made many recordings with Getz including videos of the group's performances at the Paul Masson Vineyards and the Robert Mondavi Vineyards. It was Getz who first recorded his composition, "I Wanted To Say."

By the end of the eighties, Lewis was one of jazz's busiest freelancers. He toured and recorded with a wide array of the music's most respected leaders. The long list of artists including Kenny Barron, Sonny Rollins, Art Farmer, J.J. Johnson, Mike Stern, John Stubblefield, Grover Washington Jr., The Manhattan Jazz Quintet, Ann Hampton Callaway, Bobby Hutcherson and Bobby Watson attest to his talent and versatility.

Co-leader of the group Horizon with saxophonist Bobby Watson, they have performed all around the world and recorded several albums together. Victor has contributed many compositions to the groups repertoire, including "P. D. On Great Jones Street" and the title track of their Sony Records release Present Tense.

When not driving a his own group, or one with Bobby from the drum chair, Victor has been the main-stay in the Kenny Barron Quintet since its inception. Among the many tunes he has contributed to this band, his much heralded "Big Girls" can be heard on the pianist's Quickstep disc on Enja, "Hey, It's Me You're Talkin' To" on the Polygram release Other Places.

When he's home in New York, Victor can most often be found in the city's recording studios. In addition to the many jazz dates he's recorded with people like Gary Bartz, Eddie Henderson, Johnny Griffin, Janis Siegel, Larry Willis, John Hicks and Abbey Lincoln, he has recorded a jazz method record with educator-saxophonist Fred Lipsius. An educated drummer, Lewis tries to pass on his knowledge, giving private instruction to students, participating as a freelance instructor with The New School University Jazz School-Mannes Music School Jazz Program in New York City and appearing in drum clinics around the world as often as his schedule allows it. He has participated in a symposium in Modern Drummer magazine and there have been several feature articles about him in publications such as Downbeat, The Wire, Jazz Times as well as Modern Drummer.

In 2003 Victor joined the faculty of Rutgers University in New Brunswick, NJ where he teaches drummers and coaches jazz combos.

Victor has recorded albums under his own name as well, featuring his own compositions and unique style of drumming. The first, Family Portrait, on AudioQuest includes performances by John Stubblefield, Edward Simon, Cecil McBee, Don Alias, Jumma Santos and a six-voice chorus led by Pamela Watson. Even Victor gets an opportunity to participate on some of the vocal selections and on one track plays a little piano. The album features suite-like compositions dedicated to his whole family - "Family Portrait," his parents on "A Mis Padres," children "Bella y Cosima" and "Lil' Sis."

Victor's working quintet - featuring Seamus Blake (whom Victor discovered while teaching at Gunther Schuller's jazz camp in Sandpoint, Idaho), Terell Stafford, Stephen Scott and Ed Howard - has recorded the second band offering on Enja Records entitled Eeeyyess!. The record showcases six of Victor's original tunes including the title tune "Eeeyyess" & "Here's To . . . You Babe" with lyrics written & sung by Lewis. Know It Today, Know It Tomorrow on Red Records, the first quintet album's contributors include Eddie Henderson, Edward Simon, Christian McBride and introduced tenor player Seamus Blake. Six more of Victor's compositions can be heard on this project including "Hey, It's Me You're Talkin' To" and "The Loss of a Moment."

The fourth release as a leader is Three Way Conversations on Red Records and features different trio combinations of Victor on drums and Ed Howard on bass with either Seamus Blake on tenor, or Steve Wilson on alto or Terell Stafford on trumpet. Here again is a sampling of the compositional talents of the multi-talented drummer-composer-arranger with ten new original tunes.

Still one of the busiest performers around, Victor is also currently composing music for several upcoming recording projects, including his own efforts, and continuing his attempts at combining lyrics with his tunes. He made his big-screen performance debut in the film Kansas City from producer/director Robert Altman. A fictionalized account of jazz and the scene in the music capital in the early 1930's, the film stars Harry Bellafonte and Jennifer Jason Leigh. Victor portrays a character loosely based on the drummer and jazz-legend Papa Jo Jones.

"Lewis is a master of shading and color, and the kind of timekeeper that could teach a clock new ways to tick" says jazz writer Bill Kohlhasse. As his ever increasing talent becomes more and more obvious to the general public, it is clear that Victor Lewis is an important artist on the horizon.