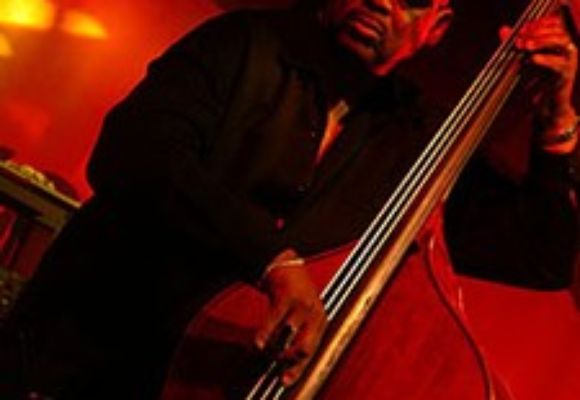 Warren Oree began playing the upright bass in 1973 at age 25. In 1975 he joined the group Weusi Mutribu and in 1979 he started the group that he leads today--The Arpeggio Jazz Ensemble.

In addition to performing with Arpeggio, Warren has toured and/or recorded with: Jamaladeen Tacuma and Basso Nouveaux; Khan Jamal; Hamiette Bluiette. He has also performed with Donald Byrd, Wynton Marsalis, Odean Pope, and drummer Norman Connors. He has toured Europe, South America, the Caribbean, and throughout the United States.

When Warren isn't performing, he's busy behind the scenes composing, producing and arranging original works. He has composed the score for two documentaries by Harmony Image Productions entitled, Anna Russell Jones--Praise Song for a Pioneer Spirit, which detailed the life and accomplishments of one of the first African-American Interior designers; and Moving With the Dreaming, which was an in-depth look at the past and current struggles of the Australian Aborigines. Warren has also composed the theme song for two seasons of Through the Lens, a TV program produced by Nadine Patterson for WYBE-TV channel 35, Philadelphia. His productions include a jazz opera entitled, The Dream Tree, and he has written and directed a one act play about the effects of prison life on those inside and outside the prison walls entitled, Living Forever, Waiting to Die. Most recently, the wireless phone company, T-Mobile has licensed with Warren Oree's production company to use excerpts from his original composition Wet Walnuts and Whipped Cream.

Since 1990, Warren has been lecturing and presenting workshops on jazz, music composition, and other aspects of music and its business at libraries, public and private schools, and universities. Most recently Warren co-produced and was Artistic Director for the 2003 Philadelphia Jazz and Poetry Festival. Also, he was commissioned by the Philadelphia Museum of Art to compose music for five paintings by African American artists.

The genesis of the ARPEGGIO sound was created in 1979 by bassist Warren Oree. The group has recorded seven CDs. The latest, LifeLine (SilkSkin) contains original compositions ranging from Afro-Brazilian beats to blues-tinged and uniquely styled jazz improvisations.

Warren Oree & The Arpeggio Jazz Ensemble have performed throughout the world, most recently at the Dominican Republic Jazz Festival along with Pancho Sanchez, Chuck Mangione and other notable artists. ARPEGGIO's repertoire includes original and standard compositions. Everyone in the band composes which gives the group a versatile sound that appeals to a variety of audiences. Their music is flexible, ranging from soft, contemplative melodies, to energetic, multi-rhythmic arrangements. It is not unusual for audiences to break out in dance in response to some of the pulsating beats issuing forth from the bandstand. They also have encouraged poets to share their writings and verse along with their musical accompaniment. The nuclei of ARPEGGIO include:

Warren Oree (acoustic, upright bass), leader of Arpeggio Jazz and Music Ensemble - has traveled extensively, performing at jazz festivals throughout Europe, the Caribbean and South America. He has recorded and produced several CDs, and creates and coordinates a variety of music related community educational programs, seminars and workshops for children and adults providing a forum and outlet for emerging musicians, creative artists and the musically inquisitive.

Umar Raheem (tenor and soprano saxophone) has toured and recorded with Hank Mobley, Sunny Murray, Monnette Sudler and others. His musical style transcends all genres. He has a unique approach to his instrument that stands out in a sea of cliches. In 1997, Umar produced and recorded his debut CD as leader, entitled: Big Boy's Honor (RHM Records). His talents as a composer are highlighted in this CD as well as his contributions to the ARPEGGIO catalog.

Greg Ju-Ju Jones (drums) has been playing drums for over twenty-five years. He has performed with Donald Byrd, Odean Pope, John Blake and other emerging and established artists. He has toured worldwide, leaving his riveting rhythms echoing across the globe. Having made such an impact in Bahia, Brazil while on tour with ARPEGGIO in 1992, Ju-Ju was embraced by the prestigious drumming society of that country and made an honorary member.

Doug Pablow Edwards (congas and percussion) is a prolific master of rhythms and tempos. He has provided accompaniment for professional dancers and other interdisciplinary venues. His powerful and driving rhythmic surges can be heard on various recordings, including ARPEGGIO's last four CDs.

Frank Butrey (guitar) is the latest member of ARPEGGIO. He joined the group in June 2000 and has been a welcome addition to the sounds and moods of the ensemble. Frank has an eclectic background which includes work with the Erie, PA Philharmonic Orchestra and with jazz bassist Jamaladeen Tacuma. He released his first CD Life and Times in 1998 and continues to compose and challenge the musical boundaries.