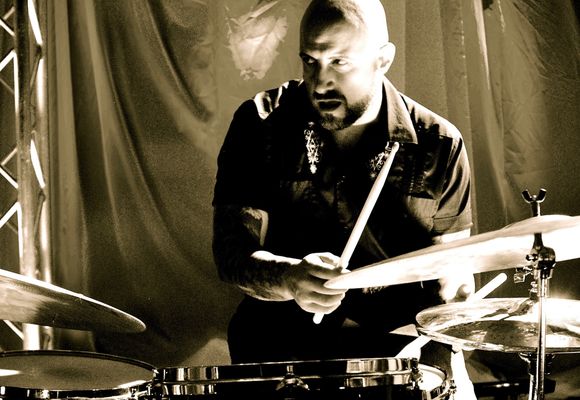 Charles Ruggiero was born to be a drummer. The son of world renowned jazz musician Vinnie Ruggiero, Charles spent his early years surrounded by the "who's who" of Jazz. There was always music around, and with musicians like Art Blakey, Philly Joe Jones, Freddie Hubbard, and Jon Hendricks coming to spend time and play, it was only a matter of time before he caught the bug and asked his father to play the "bang-bangs".

As a teenager Charles got serious about drumming, playing anywhere he could. He knew he was onto something when other high schools, local colleges, professional theatre groups and popular local bands throughout western N.Y. started to hire him. After he won a seat in the New York State All State Jazz Ensemble, every music college in the U.S. came calling. When Manhattan School of Music offered a full scholarship and a chance to study with famed jazz educator Justin DiCioccio, he jumped at the chance. His time at MSM proved invaluable. New York City in the early 90's was alive with jazz, and he was helping shape the scene along with current jazz luminaries Joshua Redman, Peter Bernstein, Jane Monheit, Ryan Kisor, Stefon Harris, Brad Mehldau, Myron Walden, Chris Potter, and Dwayne Burno, to name a few.

In 1994, Charles joined Chuck Mangione's group, touring with the jazz superstar for the next 4 years.  The first months of his time with Mangione provided him with the chance of a lifetime - learning the ropes, playing alongside the legendary drummer Steve Gadd.

In late 2000, former MTV/VH1 vee-jay, Abby Gennet, asked Ruggiero to play on a demo of a few of her songs, and the rock-n-roll band SLUNT was born. The band's rise was quick. In only their second year they were on tour with Marilyn Manson. The following years found them on tour with Motorhead, Drowning Pool, and Paul Stanley (KISS) as well as releasing two albums on Reposession Records. After SLUNT Charles found himself on Ozzy Ozbourne's Ozzfest tour, replacing drummer Matt Sorum (Guns and Roses/Velvet Revolver) as a member of Circus Diablo - a band which also featured Billy Duffy (The Cult) Brett Scallions (FUEL) Billy Morrison (Billy Idol) and Ricky Warwick (The Almighty).

2008 saw Ruggiero move to Los Angeles. He immediately began working as a "session drummer", making pop and rock records. He also got back to his jazz roots by playing with the finest musicians in LA. Larry Goldings, Eric Reed, Bob Sheppard, Tim Ries, Dennis Hamm, Bob Reynolds, David Ryan Harris, The Heirs, and 80's icon Molly Ringwald all used (and still use!) Charles as their drummer. During this time he was also the head drum teacher at 311 drummer Chad Sexton's Drum City in North Hollywood.

Now back in NYC, Ruggiero has made the list of top 100 Jazz Albums of 2015 with his debut as a band-leader "Boom Bang, Boom Bang!", a tribute to the jazz of the 70's. He has since followed that up with the release of  his sophomore effort, "As Heard On TV" a collection of television themes arranged for jazz trio, quartet, and quintet (which at the time of this writing has reached #12 on the Jazz Charts).