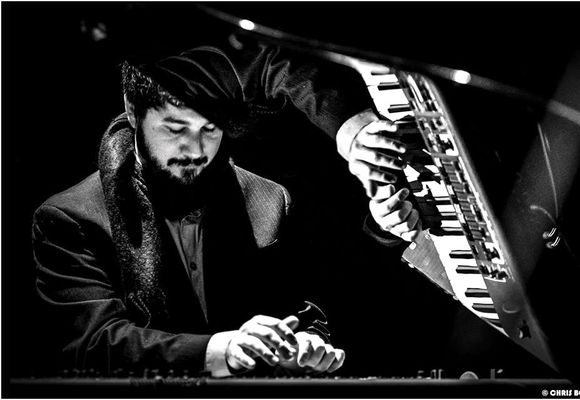 About his debut album, Yequm :

"The vast variety of sounds, melodies and different compositional structures presented on Ladin's debut for independent label contagious music is impressive, to say the least—especially when considering the coherent flow that arises. Yequm has something to offer for every type of jazz enthusiast and deserves much attention." - FRIEDRICH KUNZMANN, All About Jazz

"Ladin baits and catches the ears by using space to his advantage, not as a canvas begging to have every inch filled..... This music all feels remarkably complete without ever trying to oversell itself" - DAN BILAWSKY, All About Jazz

Growing up in Tel Aviv as the son of prominent Israeli drummer Gil Ladin, Eden began playing drums at age 4, but had gravitated toward the piano by age 8. He continued to cultivate a rhythmic fascination through grade school and, by age 14, had switched to piano as his principal instrument, studying privately with Alec Katz and Amit Golan, and with Yafim Yoffe for ear training and harmony. Having received the America-Israel Cultural Foundation scholarship for jazz performance studies abroad, as well as a scholarship to study as an undergrad at The New School for Jazz and Contemporary Music, Eden began seeking out the instruction of such visionaries as, among others, George Cables, Reggie Workman, Billy Harper, Kirk Nurock, William Parker, Robert Sadin, Charles Tolliver, Gerard D’angelo, Jane Ira Bloom, Kevin Hays, Sam Yahel, Joanne Brackeen, Vijay Iyer, Doug Weiss, Ari Hoenig, Ben Monder and Lee Konitz—the latter of whom awakened Eden to an enduring concept: “Play what you sing; don’t sing what you play.”

Sitting in silence, listening to the music resonating in his mind, Eden has uncovered a personal narrative of original compositions. Each reflects years of musical exploration, traveling back and forth between New York and Tel Aviv. His debut recording YEQUM (Contagious Music, 2017) presents 11 of these compositions, their unique artistries co-interpreted by Dayna Stephens, John Ellis, Gilad Hekselman, Harish Raghavan and Daniel Dor, alongside special guests Camila Meza and Yonatan Albalak. In Hebrew, “yequm” represents “universe.” Through his compositions, Eden has recreated his own personal universe, a glimpse at which he seeks to offer the listener with every track.