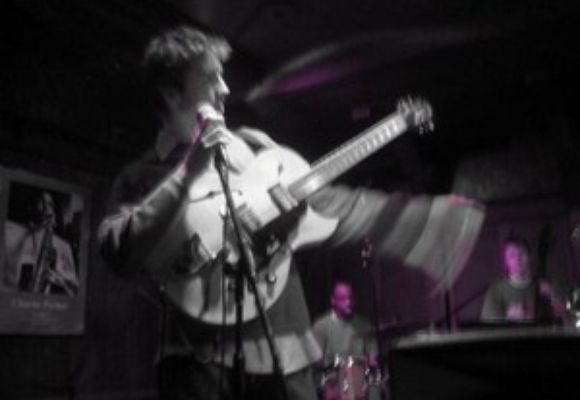 Born in West Chester Pennsylvania, Nick Bockrath was raised by two artist parents in a highly creative environment. He began playing cello at the age of 8, and played in competitive and traveling orchestras for about 10 years. In high school Nick also studied upright bass, which he played in orchestras and in his high school jazz band, it was during this time Nick decided he wanted to play guitar and began studying with local teachers and started his own band. By his senior year he was playing regularly in New York City and Philadelphia nightclubs and going into class early the next morning. He decided to pursue music as a career and enrolled at the University of the Arts in Philadelphia.

After moving to Philadelphia Nick quickly started immersing himself within the cities music scene and was exposed to a lot of great jazz, R&b, fusion, and gospel music which formulated a whole new perspective on where he wanted his own music to go. Nick has/continues to study with such masters as Blue Note Recording artist Pat Martino, Kevin Hanson, John Swana, and Matt Davis. Nick continues to travel and perform around the country with various groups, and continues his quest to become as fluent and well rounded of a musician as life can allow him the experience to become. Nick currently leads his own jazz quintet featuring Adam Siegel (alto saxophone), Leon Boykins (bass), Dylan Bab itch (piano), and Anwar Marshall (drums.) He has also been a featured artist in the Philadelphia Inquirer, and on Allaboutjazz.com

Nick is currently working regularly with jazz octet Highbrid, rock bands such as Elevator Fight (featuring Zoe Kravitz) and Cortez Cortez with guitarist Barney Mckenna, and his funk group/collective Bodega (which just released their debut record Bounce on Ropeadope Records.) You can find Nick playing regularly around Philly or rehearsing/recording at the famed Larry Golds Studio in Philadelphia. Nick is also involved in a new series presented by Ropeadope Records called the South Philly Experiment, a monthly improvisation series that will culminate in an album at the end of the year, featuring some of Philadelphias finest musicians. Through the years Nick has had the chance to perform with such great musicians as: Marco Benevento, Gerald Veasley, Robin Eubanks, Jeff Bradshaw, and a long list of bands/musicians through live performances and recording sessions.