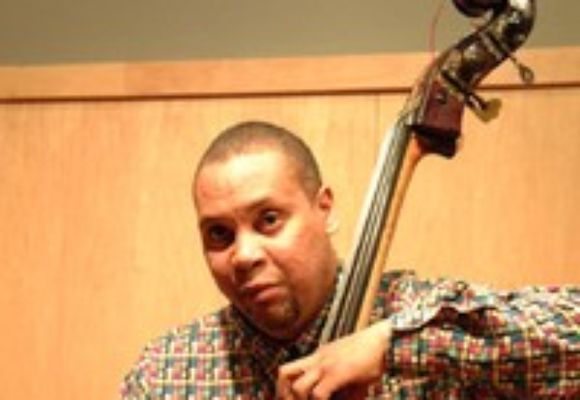 Santi Debriano & Flash Of The Spirit

Santi Debriano and Flash of the Spirit

Santi Debriano and Flash of the Spirit

Born in Panama in 1955, Santi moved to New York at age four. His father, a Panamanian pianist- composer, sparked Santi's early interest in music. By 9, he was studying classical bass in a New York City school for gifted children. In junior high school he switched to guitar, playing regularly with a jazz-rock group. At age 14 he heard his first live jazz, a Billy Taylor Trio school show. Santi was an instant convert: jazz was the music he wanted to play.

At Union College he led the school's jazz workshop, playing both guitar and bass, and taking his first composition lessons. A year at the New England Conservatory brought Santi back to full time bass playing. An offer to tour with Archie Shepp cut short his studies; he played with Archie for the next four years.

In 1981 Santi moved to Paris where he played with Sam Rivers and led his own groups. Most notable was one with Chico Freeman, Billy Hart and Kenny Werner. That group was also the first major group to feature his originalsthe begining of an ever-deepening commitment to composing.

Returning to the New York scene in 1985, Santi was soon playing and recording regularly with giants like Don Pullen, Pharoah Sanders, Louis Hayes and Arthur Blythe. Within a couple of years he was again leading his own groups, including an innovative double bass quintet and Euforia, a Brazilian-flavored trio playing his and Paul Meyer's compositions.

Playing and touring actively in the early 90s, Santi also started graduate studies at Wesleyan in ethnomusicology and world music. Out of these interests grew his current band, Circlechant, combining influences and musicians from Brazil, Israel, Belize, Cuba and Panama. At the same time, his academic career is flourishing: he is currently Assistant Professor of Jazz Studies at UMass.

Since his first record date in 1987, Santi has appeared on over 100 recordings, including eight as leader. His previous Mapleshade CDs are Jazznost with Walter Davis Jr., The Offering with David Murray and Euforia.