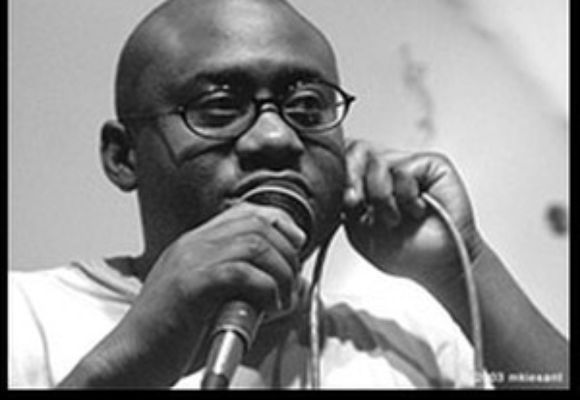 In just a few short years, Miles Griffith's fearless approach to music has helped him to emerge as a serious contender on the modern jazz scene. Adept in any context, his organic style is adventurous, whimsical, fiery, heart-felt and always on the cutting edge. Griffith seamlessly weaves together a potpourri of styles illuminating the "down home" fun missing in much of jazz' current vocal genre. With an instrument which is poised and mature beyond his years, Griffith is also comfortable with some of the more traditional vocal repertoire. Noted jazz critic, Ira Gitler of Jazz Times states, "Griffith's balladry bows in the direction of the romantic baritones of the '40s and '50s," while Bob Young of the Boston Herald declares, "his oblique Betty Caterish approach shows off his dark phrasing and penchant for melody."

Miles Griffith's non-traditional use of the voice as a percussive instrument, combined with an uncanny harmonic sense has made him a prime choice for many musicians. He's been a member of T.S. Monk Septet, James Williams' ICU and Jack Walrath's Masters of Suspense. Griffith is at the forefront of some of the music's most inventive working bands. "I enjoy working with these guys because they love the music. It is a continual learning process because they all have such different concepts, and in each group I can strive to contribute something new," reflects the vocalist. In the past, Griffith has collaborated with such revered ensembles as the Jon Hendricks' Explosion, Jimmy Heath's Big Band, Roy Hargrove Big Band, Stanley Cowell Quintet and the Bill Saxton Quartet.

In 1994, he played the lead role of "Jesse" in Wynton Marsalis', celebrated Blood On The Fields, the specially commissioned jazz oratorio, which premiered at Lincoln Centers' Alice Tully Hall. Griffith also participated on the recording, which was released on Sony Music in mid 1997 to end Marsalis' Pulitzer Award and Grammy winning world tour. Will Friedwald states, "Miles Griffith shows off the scat technique that made him Wynton Marsalis' choice for the leading role in Blood On The Fields."

Griffith is not only a stellar performer he is also a band leader and record producer. Having four CD's under his belt and his most recent work, Smile Again on Griffith Records, a record label Griffith created. Author, historian and jazz critic Ira Gitler states about Smile Again, "Miles Griffith is a very talented, multi-faceted singer who can croon short and sweet as in "Hello Friend" or, using his voice instrumentally can unleash passionate, informed swing as in his version of Thelonious Monk's "We See." I like Tony's solo on "Autumn in New York" and Miles scatting here combined the melodic, harmonic and rhythmic beautifully. We see and hear. Oo-pa-pa-da!"

In addition to extensive work as a sideman, Griffith is gaining a reputation as a fine composer and lyricist. His lyrics have been featured on two of Jack Walrath's recordings, Nick Russo new CD, RO due out in June 2006, and trumpeter Fabio Morgera's music. His compositions and lyrics are also featured on his 4 CD's as a leader. Village Voice critic writer Jim Macnie states, "The vocalist has a wail that's able to shake a room, a visceral blues sensibility, and gregarious sense of humor." December of 1999, Griffith released his first CD as a leader called Spiritual Freedom on Griffith Records. Critic Steven A. Loewy's CD review states, "What Griffith does do well is to take hold of a tune and squeeze it into his concept."

Griffith has been a jazz vocal educator for 18 years, having a Masters of Jazz Vocal Performance Degree from Queens College, Bachelor of Fine Arts degree from Long Island University and a private instructor. In 2005, Griffith received the new Vocal Jazz Instructor position at Columbia University Jazz Department in New York City. Griffith taught twelve years at the New School Jazz and Contemporary Music, four years at Jazzinty in Novo Mesto, Slovenia, one year in Izola, Slovenia with the Plesni Dance School and one year at the Groningen Conservatore in the Netherlands. He brings his performance energy to the education realm to excite, encourage and empower his students.

Griffith split his collective ensemble, Miles Griffith: Voice, Drums and Dance and created two groups, The Miles Griffith & Trio and The New Ting. Both groups still have the unique "performance art" flavor of Voice, Drums and Dance but take the music into two directions: The contemporary jazz and avant-garde direction! The two groups mainly consist of Trio settings that include pianists James Gordon Williams, Orrin Evans and Michael Jefry Stevens, bassists Hill Greene, Paul Beaudry and Richie Goods, percussionists Taru Alexander and David Pleasant and various visual artists. "These two groups essentially operate at the improvisatory level. Both groups invite the audience to actively engage in the musical experience. This is the premise of African music."

A native of Brooklyn, New York, Miles Griffith's musical roots emanate from the Baptist, Methodist, Pentecostal, A.M.E. and Yoruba ministries. However, he attributes his percussive vocal style to his Trinidadian roots. Both of his parents come from musical backgrounds, emigrating from Trinidad, and they have performed in numerous church choirs and steel bands throughout the tri-state area. Griffith's professional performance career began at the age of six. His first major gig was extra work in One Trick Pony, Paul Simon's biographical movie. At age 11, he became a member of the esteemed Boys Choir of Harlem, which led to extensive touring and performances for the young musician. Further honing his skills, the ambitious young musician was accepted into New York's prestigious LaGuardia High School of Music and the Performing Arts, where his concentration was classical voice.

However, it was in his junior year that he fell with Louis Armstrong, Thelonious Monk and Billie Holiday. Prior to graduating, Griffith gigged around town with fellow schoolmates, pianist Stephen Scott, alto saxophonist Justin Robinson, drummers Gregory Hutchinson, Taru Alexander and others. During this time, his mainstay was the renowned Barry Harris Workshop where he performed on a weekly basis.

Griffith continued his musical education at Long Island University and onto Queens College where he received his Masters degree in Vocal Performance under the direction of Jimmy Heath and Sir Roland Hanna. As for Miles Griffith's future plans, he states, "I plan to put the voice back on the scene as the ultimate first instrument."