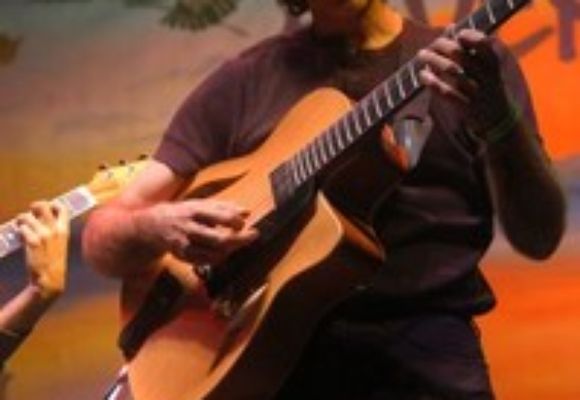 Frank is one of the most accomplished, multi-dimensional players walking the planet today. Monster player, composer and improviser, Frank plays proficiently in every genre, from jazz to bluegrass, and works with everyone and their brother. Franks pedigree is a mile long, but a quick Google will illustrate why he is considered one of the best on the planet.

Whether he is featured on a Donald Fagen recording, a jam with David Grisman, as Les Paul's right hand man or leading his own groups throughout the years, he has proved himself to be in the elite creating his own unique sound.

Born on suburban Long Island, Vignola was raised in the New York area. The Italian-American started playing the guitar at the age of five and grew up admiring a variety of guitarists. Far from a jazz snob, Vignola never listened to jazz exclusively and was also a major fan of rock, R&B, and pop. The guitarists that he admires range from Django and George Barnes to rock icons like Frank Zappa and Eddie Van Halen. As a young adult, Vignola studied at the Cultural Arts Center of Long Island and went on to enjoy an enormous amount of sideman gigs in the 1980s including recording and touring with the likes of Madonna, Leon Redbone, Ringo Starr as well as coming into his own as a leader in 1988 with his famed Hot Club of France tribute which was hailed in the NY Times as one of the top ten acts in 1988 and forged the way for the many Django Hot Club groups that followed. The New Yorker was 27 when, in 1993, he signed with Concord Jazz and recorded his first Concord session as a leader, Appel Direct. Many more Concord releases followed in the 1990s as well as 3 releases for the Telarc label as co-leader of the group Travelin' Light. The early 2000's found Vignola recording for Acoustic Disc, Hyena Records as well as making featured appearances on Atlantic, Sony and Warner Brothers Records with the likes of Donald Fagen, Queen Latifah, Mark O Connor and Wynton Marsalis. Mr. Vignola has also recorded several DVD's for Mel Bay Records. "Gypsy Jam" features Jimmy Rosenberg and "Favorite Solo's" features Frank with one of his guitar heroes, Bucky Pizzarelli. Frank has written 18 guitar instruction books for Mel Bay Publications and has recorded several CDROM educational products for Truefire.com. He has performed hundreds of clinics and masterclasses at major universities and colleges throughout the country including Julliard and Boston University. Vignola is currently touring with his band in celebration of his new release DVD/CD combo titled "LIVE AT THE SHELDON" on the Mel Bay record label.