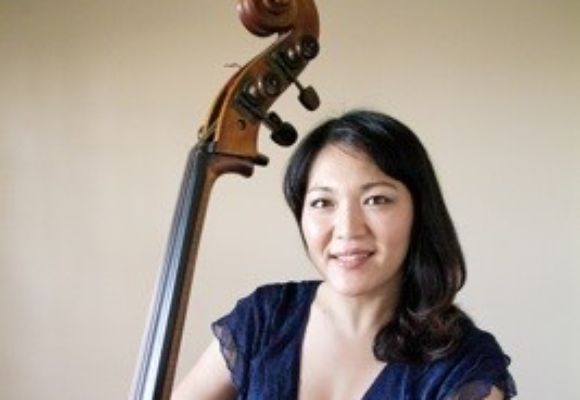 Noriko Ueda is originally from Hyogo, Japan. Her musical background consists of studying classical piano since the age of 4, playing electric bass since the age of 16, studying classical voice at the Osaka College of Music where she received a diploma, and at age 19, learning the acoustic bass, which is currently her main instrument. Noriko was a B.E.S.T. scholarship recipient and majored in Jazz Composition at the Berklee College of Music in Boston where she graduated in 1997. For several years, Noriko has been a bassist of the all-female big band Sherrie Maricle and The DIVA Jazz Orchestra. She can be heard on DIVA's recent records Live in Concert (2003), TNT (2004) and FivePlay...plus (2004). Some of the venues that the orchestra has appeared include Carnegie Hall, The Kennedy Center, Apollo Theatre, Blue Note, Dizzy's Coca Cola and Birdland. The band has performed with Nancy Wilson, Diane Schuur, Tommy Newsom, Ann Hampton Callaway, and The New York Pops. Noriko is also a bassist of Grady Tate Quintet and Satoshi Inoue Quartet, performed at the Blue Note, Sweet Rhythm and Iridium in New York City. During the summer 2006, she had the opportunity to tour three times in Japan with Ted Rosenthal trio featuring Victor Lewis, the Satoshi Inoue Quartet and the Fiveplay which with the addition of the Portuguese singer Maria Anadon took her in the early Fall to the Cork festival in Ireland and in Portugal where they performed the music of their debut CD "W.O.W." that has been released by Arbors Records in fall 2006. Her own quartet also performed many of her original compositions at the Blue Note in New York City several times. With such a wide span of musical activity, the list of jazz musicians with whom she played ranges from Roy Haynes, Gary Bartz, Michael Carvin, Joe Cambers, Othello Molineaux, Makoto Ozone, Joe Hunt, Bob Moses, Harry Whitaker and many more. Noriko has an impressive list of performance and recording credits in film and TV: Jazz Central (Black Entertainment Television 1998) - all-Japanese female trio, Groovin' Girls, performing excerpts from their debut CD Piece of Cake; Times Square Transfer (PBS 1999) - a musical short film featuring Noriko on the soundtrack and performance; the documentary film Jamming (1996) directed by John Kao - she was featured in a live performance and interview; Berklee College of Music CD called Summa Cum Jazz (BMG 1997); Naniwa Jazz Festival in Osaka (1995) - Noriko took part in a live televised performance with the Terumasa Hino Quartet; In 2002, Noriko received the Charlie Parker Composition prize by the BMI Foundation for her original piece, Castles in the North. The following year, she presented her first Manny Album Commission piece to the BMI Annual Showcase Concert at Merkin Hall. In January of 2004, one of her compositions was selected as a representative piece of the BMI Jazz Composer's Workshop, which she conducted at the IAJE Annual Conference in New York City. Noriko has lived in Brooklyn, New York since January of 1998, where she continues to perform, compose and enjoy life.