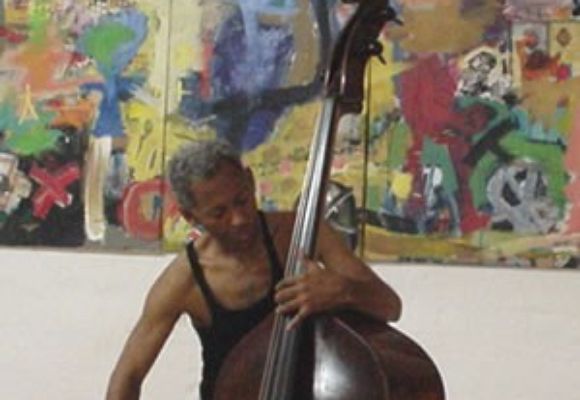 Playing professionally since 16, Juini Booth has expanded the range of the contrabass into a refined personal language of intense acoustic awareness and spatiality of sound. Firmly rooted in the forefront of the American jazz tradition, which he has helped to shape, Booth's music also integrates influences from world music, emerging beyond the boundaries of categories to express the poetics of universal humanness. His compositions reflect a masterful use of simple melodic themes developed through unexpected harmonies, unusual tonal qualities and time relationships, inviting the listener to a new level of musical perception.

Booth , has performed and toured for over 30 years with jazz musicians from Art Blakey and the Jazz Messengers to Tony Williams Lifetime to Coleman Hawkins to Albert Ayler to Chuck Mangione to Sun Ra to McCoy Tyner.

Juini tours extensively in Western and Eastern Europe, performing solo bass concerts in the U.S., Canada and Japan. Some career highlights have been a concert with Randy Weston at the Tangiers Jazz Festival, Morocco; and with Sun Ra Arkestra in Tiblisi,Georgia (USSR) a film of painter Larry Rivers entitled "Round Trip."

He received the Mingus-Zimmerman Award sponsored by ISB (International Society of Bassists) for Most Imaginative Performance in the Free Choice Category Music Curator at Hallwalls in Buffalo New York (1981-82) and at NAC Niagara Arts Council in St. Catherine's, Ontario (1991). His compositional work has been supported by an NEA composers' grant, CAPS, and Meet the Composer. ...Booth is currently focusing on composing new works for contrabass, and collaborative projects with artists of other disciplines, as well as teaching and recording.

* New Work for Solo Bass, premiered at The Rivoli and The Music Gallery, Toronto, Ontario, 1992; followed by 4-city tour of Ontario, Canada.

* Suite for Solo Contrabass, premiered at Ali's Alley, New York City, 1978. This is a set of five solo works from which many tangential compositions have been developed and performed.

* Journey to Enlightenment, solo contrabass, recorded on McCoy Tyner's "Enlightenment" album (Milestones label), in performance at Montreux, France, 1973. Since that time, this piece has been performed in many venues throughout Europe and is considered a signature work.