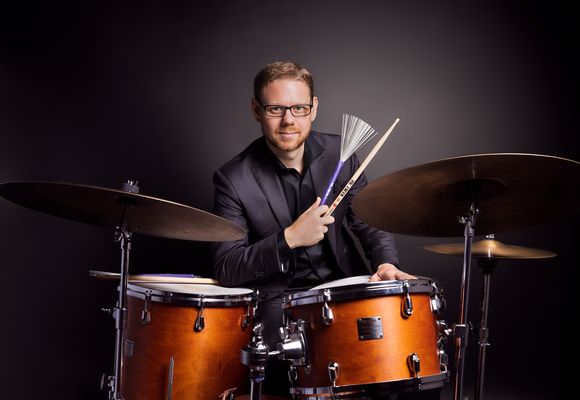 Drummer, Pete Zimmer, moved to New York City in June of 2001, and has since established himself as one of the top-call drummers in New York City’s jazz scene. Originally from Waukesha, Wisconsin, Zimmer has made his mark nationally and internationally as a versatile and articulate drummer, bandleader, sideman, composer, educator, and record label entrepreneur.

Since 2004, Pete Zimmer released five (5) critically acclaimed albums as a leader on his own record label, Tippin’ Records. The albums showcase both his constant swing on the drums and his skillful and melodic compositions. His composition, “Time That Once Was,” a moving ballad recorded on his first album Common Man, was recently licensed to Sony Pictures Television where it was featured in the opening scene of the series they produce “Masters of Sex” (Episode 307, Monkey Business), aired on Showtime. He has received many accolades from major publications. "Pete Zimmer has learned his New York lessons well, as his dry tone, meaty swing beat and subtle accents make him an old hand” (Down Beat), and "Zimmer's drumming boasts a crisp, swinging command with judicious musicality." (Modern Drummer)

Pete Zimmer is a highly regarded educator and clinician. He has presented clinics and masterclasses at many top collegiate jazz programs throughout the United States and United Kingdom. He is a faculty member with the New York Jazz Academy since 2009.

Pete Zimmer’s record label, Tippin’ Records, was originally established to feature his own projects, but after having much success with his first few releases, it did not take long for other artists to solicit their projects to Tippin’. In 2009 Zimmer decided to expand the catalogue and encompass additional artists.  The first additional artist was trumpeter Vitaly Golovnev with the release of To Whom It May Concern and was followed by guitarist Kyle Asche Organ Trio (featuring legendary organist Melvin Rhyne), Blues for Mel. The label now has a total of one dozen releases and six artists.

Before moving to New York, Zimmer studied at Northern Illinois University in DeKalb, Illinois and at the New England Conservatory of Music in Boston, Massachusetts, earning his bachelors degree. At the Conservatory he was fortunate to have apprenticeships with master musicians and teachers Danilo Perez, Cecil McBee, George Garzone, Bob Moses, Jerry Bergonzi, and Bob Brookmeyer.

All Music Guide stated, “Pete Zimmer's fourth recording as a bandleader and composer might stake his claim as a modern day version of Art Blakey."