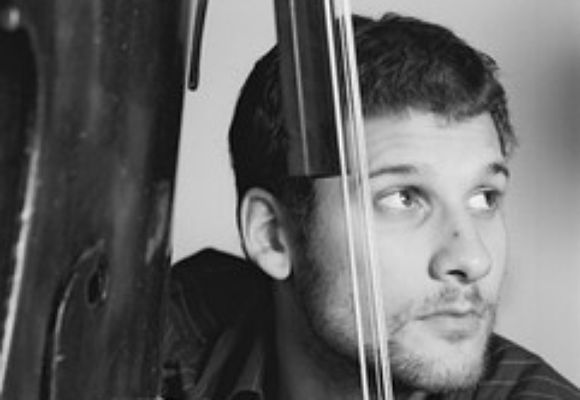 Born in 1978, the german-french bassist Pascal Niggenkemper played from early age on the violin and the piano. At the age of 17, he experienced the impact of improvised music and started to play the double bass. In 1999 he moved to Cologne where he studied jazz and classical double bass at the Hochschule für Musik Köln.

He was a member of the audio visual dance project Turbo Pascale. Elements of dance music are blended together with aspects of free improvised music and folk music. Two VJ's who interact with the gesture of the music and project their visual expression on the screen are part of this group. This formation toured Germany, Kazakhstan, Czech Republic, Slovenia, and France, as well as appeared at festivals as the Jazz festival Moers and the Jazzmesse Jazzahead Bremen and the "WDR Jazznight" with live radio broadcast on WDR Radio.

Pascal Niggenkemper was a member of Trio Sence, a piano trio that was over 10 month in the top ten of the jazz charts with the CD "away for a while" (Mons records).

Member of the German Youth Jazz Orchestra (Bujazzo) he played the 25 years anniversary tour of the Deutsche Musikrat with guest conductor Gunther Schuller. Concerts of the Group Jälg with the Estonian singer Siiri Sisask brought him to clubs, churches and concert halls in Estonia and Germany. The group recorded the CD "teine jälg". (Finetones records)

In 2005 Pascal Niggenkemper was granted the DAAD Award from the German government to continue his studies in New York where he graduated from Manhattan School of Music with a Masters Diploma in Music Performance.

He joined the international formation Mizo, a band which plays greek influenced jazz music. They recorded a CD with guest artist Lionel Loueke and toured in Belgium, France and Luxembourg in 2009. In 2007 Pascal toured Korea with the group Vian. They recorded the CD Ordinary Days.

It is in NY that Pascal met Robin Verheyen and Tyshawn Sorey and formed the Pascal Niggenkemper Trio. The trio recorded the CD "pasàpas" for the label Konnex. The Pascal Niggenkemper Trio toured twice in Europe (Belgium, Germany, Switzerland, France and Austria) and played at the Jazzcologne Festival and the Jazzherbst Konstanz. Their performances were recorded for the WDR and the BR Radio. A new tour in Europe as well as the release of a new CD is planned in March 2010.

In March 2009, he received the 2nd prize in the BMW Welt Jazz Competition with the band Minsarah.

With guitar player Scott Dubois and drummer Jeff Davis Pascal formed his new band pascals newfield, that explores an area where post-modern jazz aesthetic, rock music and contemporary classic music fuse together. This ensemble will be on tour in December 2009 in Europe.