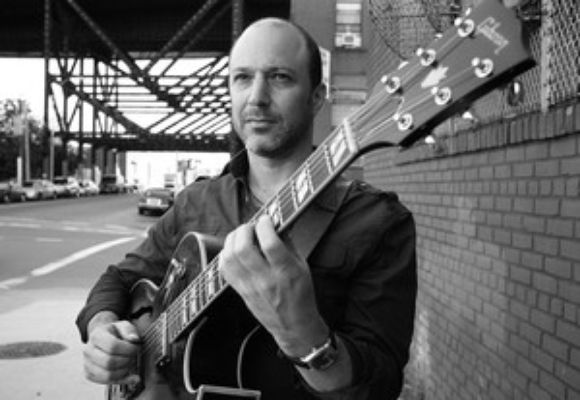 Russ Spiegel was born in Los Angeles, and raised in Santa Monica, California. Coming from a musical family - his grandfather was a classical violinist who played with the Los Angeles Philharmonic and various studio orchestras while his brother won the prestigious Battle of the Bands at the Hollywood Bowl in 1969 - music has always played a prominent role in his life.

Not originally intending on a musical career, Russ always played in various groups while at high school and university. However, after completing his Bachelor's Degree at the University of Michigan, where he majored in Philosophy, on a whim he applied to the Berklee College of Music in Boston, and was promptly awarded a Professional Music Scholarship. Breaking off his graduate studies, Russ decided to study music seriously for the first time at the age of 24. While at Berklee he studied Composition, Arranging and Guitar Performance.

He has performed hundreds of concerts in America and Europe, has appeared at more than 50 Jazz and Blues Festivals and has been on Radio and Television numerous times. Through his work with Barbara Dennerlein, Gene Mighty Flea Conners (from the Johnny Otis Band) and his own groups, Russ has appeared almost everywhere in Europe.

Russ has worked with German jazz organist Barbara Dennerlein (#1 TDWR Downbeat), and with his own projects: Russ Spiegel's Big Bad Big Band, the Russ Spiegel Trio and a variety of Soul, R&B and other Jazz-related groups. His CD Twilight (Double Moon/Challenge) has received rave reviews in Europe and was Audiophile Tip of the Month in the German magazine stereoplay (02/02).

Since coming to New York in 2001, Russ has been very busy on the scene there. Playing in numerous groups such as Bill Warfield's Big Band and the Harlem Renaissance Orchestra - from solo guitar to his sextet to running his own big band, The Russ Spiegel Big Band (a 17-piece jazz orchestra featuring Russ's compositions and arrangements as well as his guitar playing) - Russ has established himself as a performer and teacher, composer and arranger in the greater New York area. He is also involved in television, being the guitar & music coach for the hit Nickelodeon TV show "The Naked Brothers Band."

In March, 1999, Russ was awarded by the city of Frankfurt its Jazz Scholarship prize of DM10,000.00 and in October of that year appeared with Big Bang at the Frankfurt Jazz Festival, Europe's oldest and most renowned festival of its kind.