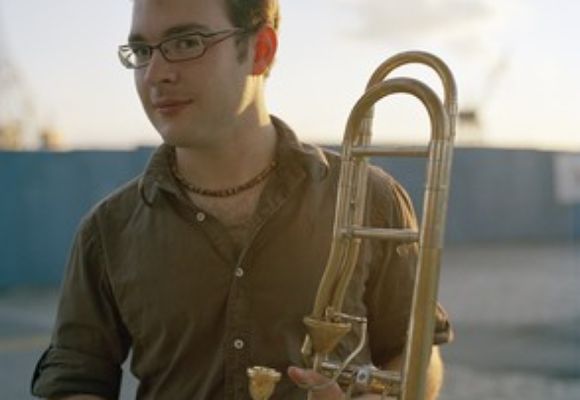 Samuel Blaser, is a New York based trombonist and composer. He is an active performer in jazz, improvised and contemporary classical music throughout Europe and abroad. In addition to leading his own groups such as AebyBlaser Quartet, Samuel Blaser Quartet or the new BraffBlaser duo, Samuel is currently playing with Malcolm Braff & TNT, the International Street Cannibals, the Animal Forum and the François Lindemann Septet. The up-coming trombonist Samuel Blaser has performed with the biggest names on the jazz scene and the 2008 Blaser's new project will feature drummer Joey Baron, bassist Marc Johnson and guitarist John Abercombie.

He also performed in many Big Bands featuring soloists Phil Woods, Clark Terry, Jimmy Heath, Buddy DeFranco, New York Voices, Jim McNeely, Franco Ambrosetti, Bert Joris, before sitting in at the prestigious Vienna Art Orchestra in 2002. He was also selected to represent Switzerland in the European Radio Big Band tour 2005, which was a "Tribute to Oscar Peterson." In 2006, he was selected by Croatian Radio to represent Switzerland for the concert series at the Zagreb Jazz Festival.

Samuel has won several awards and musical contests such as the Benny Golson Prize in 2000, the Honorable Mention for the J.J Johnson Prize in 2006, the "Public Prize" and "Jury's Favorite Player" which were presented by Bob Mintzer the same night. Rene Laanen from the USA Trombone Online stated that: Samuel Blaser is one of today finest trombonist.

Samuel Blaser has already recorded more than 30 albums and has been acclaimed by many international newspapers. He has performed with such jazz personalities as Hal Galper, Adam Nussbaum, James Cammack, Renee Rosnes, John Clark, David Taylor to name a few.