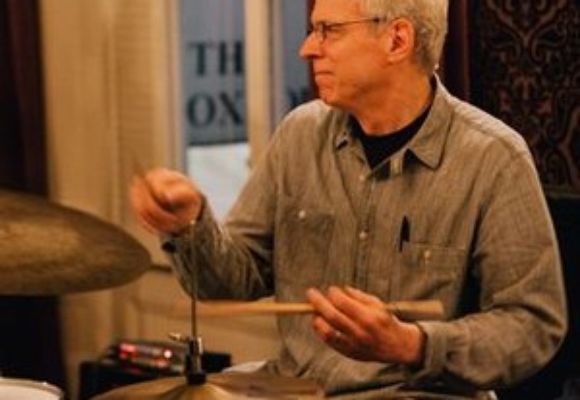 Jeff Williams was raised in Oberlin, Ohio where he began playing drums at age eight. Self-taught, with the aid of his parents' collection of jazz recordings as a guide, he started playing gigs with local professionals at age fourteen. Jeff's mother, Ann Williams, moved to New York to pursue a jazz singing career when he was nine, introducing him to a number of musicians who would be his early mentors, including drummers Jo Jones, Herb Lovelle, Elvin Jones, and Oliver Jackson. In 1967 Jeff made his recording debut with the psychedelic group Ant Trip Ceremony (Cicadelic).

In 1968 Jeff entered the Berklee College of Music and studied drumming with Alan Dawson. In 1971 he moved to New York and soon became acquainted with Dave Liebman and Richie Beirach, with whom he would form the group Lookout Farm. In 1972 Jeff joined Stan Getz for a two-year stay in groups that included Dave Holland on bass and pianists Hal Galper, Beirach, and Albert Daily. He appeared at the Half Note with Lee Konitz the same year, beginning an association that would continue for several decades. Jeff also recorded Friends (Oblivion) in 1972 with Marc Cohen (now Copland), John Abercrombie, and Clint Houston.

Following the recording of Lookout Farm (ECM) in 1973 Jeff toured Europe, Asia, and the US while also participating in multiple subsequent recordings until the group disbanded in 1976. For the remainder of the 70s Jeff freelanced in and around New York, accompanying artists like Joe Farrell, Frank Foster, Nick Brignola, Billy Mitchell, and George Coleman, while also performing n groups led by Arnie Lawrence (Treasure Island), Ted Curson, Richard Sussman, and Albert Daily, as well as leading a band that included John Scofield.

After a one-year hiatus in Maine, Jeff moved to Boston in 1981. While resuming study with Alan Dawson, Jeff took part in the formation of a jazz series at Harvard University's Hasty Pudding Club. There he accompanied Cedar Walton, Lee Konitz, Milt Hinton, saxophonist Bill Evans, John Scofield, and Miroslav Vitous. From '83 to '86 Jeff performed and recorded with Jerry Bergonzi's quartet Con Brio. Following a return to New York in 1983 Jeff formed the trio Interplay with Peter Madsen and Anthony Cox, toured Japan with pianist Sakurako Ogyu and Marc Johnson, and also worked with Michel Petrucciani, Art Farmer/Clifford Jordan, Randy Brecker/John Abercrombie, and Cecil McBee's quartet. For the majority of 1988 Jeff played with Stan Getz, joined by the Interplay rhythm section, with Kenny Barron later replacing Madsen. In 1990 Jeff initiated a music policy at Bar Room 432, located in the meat packing district of New York, where he led a trio with Ben Monder and Scott Colley and also performed with Dave Liebman and Joe Lovano.

The first release of a Jeff Williams' composition appeared on Frank Kimbrough's Lonely Woman CD (Mapleshade) in 1989. Jeff began writing for his own ensembles in the mid-eighties, recording Quartet (unreleased) in '89 with Patrick Zimmerli, Kevin Hays, and Scott Colley. Enlarged to a quintet in 1991,with the addition of Tim Ries, and the replacement of Colley with Doug Weiss, the ensemble released two recordings, both comprised entirely of original compositions: Coalescence (SteepleChase) in 1992 and Jazzblues (Cathexis) in 1999.

Jeff's other activities during the nineties included appearances in the US, Europe, Brazil, and Argentina, as well as various recordings, with Lee Konitz,; a tour of Europe with Joe Lovano, Tom Harrell, and Anthony Cox, and several tours of Europe and the US with Lovano's Universal Language ensemble. In addition to performances with Circadian Rhythms, featuring Tony Malaby and Michael Formanek, Jeff also began playing with Bill McHenry, Ethan Iverson, and Reid Anderson, subsequently recording Live At Smalls (Fresh Sound/New Talent) in 2000, and McHenry's Sonic Pressure (Fresh Sound/New Talent) in 2005. Jeff toured Europe with Paul Bley in 2001.

In addition to private instruction, Jeff has given master classes, directed ensembles and undertaken one-to-one drum instruction at The New School, Long Island University, the University of Connecticut, and Maine Jazz Camp. He is currently on the faculty of the Royal Academy of Music in London and Birmingham Conservatoire.