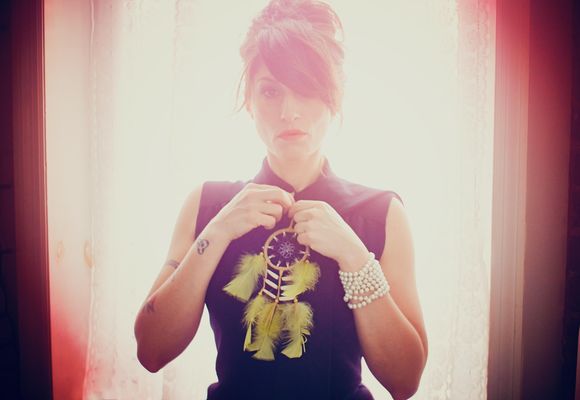 Sasha Dobson, Brooklyn darling of jazz and daughter of Bay Area jazz icons, Smith and Gail Dobson has been on the New York scene for the better part of 20 yrs. Alongside the Chris Byars octet, Sasha recorded her first album in 2004 on “Smalls” record label entitled The Darkling Thrush. Her career took a swift turn to mainstream when she decided to take the reigns and pick up a guitar. Her motivation (to accompany herself) translated immediately into songwriting. Her innate jazz improvisation and sensibilities were the starting point of the NY scene Sasha was about to lead. Her second album produced by songsmiths: Jesse Harris and Richard Julian entitled Modern Romance was named “the artists worth a listen” via Time magazine.

Booking underground shows to hone her newest medium, Sasha formed a sound that would lead to the co creation, of the band Puss n Boots, with Norah Jones and Cat Popper. Puss n Boots was signed to Blue Note Records in 2014.

Supporting the album she opened for acclaimed artists such for Willie Nelson, Neil Young,  lead her own band as a feature at Farm Aid. She has also joined the stage with Wilco, Mavis Staples, Ryan Adams, Charles Bradley, Cat Power and has had live appearances on Jimmy Fallon, Letterman, and Colbert. Sasha has also performed at the Newport Folk Fest, the Bridge School Benefit and the 2015 MusiCares person of the year gala.