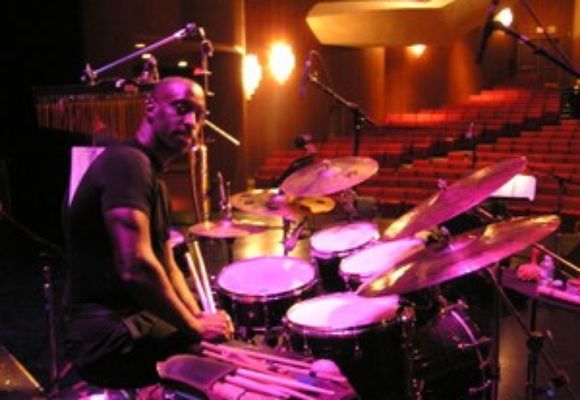 Willard Dyson, an active and extremely talented drummer on the New York and international music scenes, came to New York City in 1986 from Oakland California. A versatile musician, Willard is at home in a myriad of musical genres including Jazz, R&B, African, Latin and Brazilian music. Willard has worked regularly with a diverse group of musicians including Michael Franks, Joe Sample, Charlie Hunter, Regina Belle, Grady Tate, The Boys Choir of Harlem, Jimmy Scott, The New York Voices, Dakota Staton and Cassandra Wilson. He keeps very active in New York City by playing at local clubs, concerts, recording and private instruction. Willard often tours the United States, Japan and Europe as well as numerous other countries. In 2003 he toured North Africa, The Middle East and South Asia as part of the U.S. Department of State and Kennedy Centers Jazz Ambassador Program. He has been called, "perfect, imaginative, sensitive, exciting and subtle, with a stunning flair for devastating funk," in The Wellington Journal. In 2000 Willard was a featured percussion soloist with the Brooklyn Philharmonic Orchestra for the U.S. premier of Takashi Yoshimatsus saxophone concerto Cyber-Bird. Willard has also appeared on many national television shows including The Tonight Show, Soul Train, The Arsenio Hall Show, Good Morning America, The Today Show and BET. Willard has been playing percussion since the 5th grade when he received his first drum set. He also sang in his church choir throughout junior and senior high school and received a scholarship to participate in the prestigious Young Musicians Program at the University of California at Berkeley. He received a Bachelor of Arts degree in Percussion Performance from California State Hayward University and a Master of Music degree in Jazz and Commercial Music from the Manhattan School of Music in New York City.