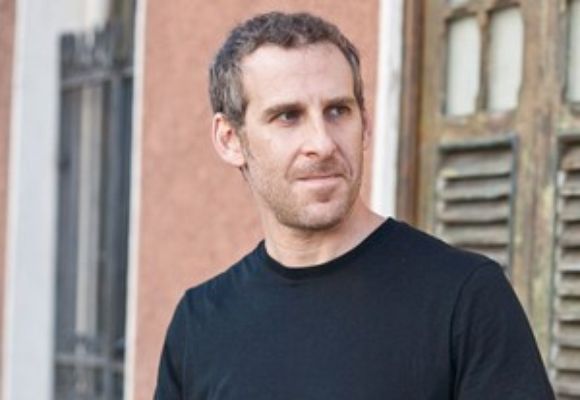 pandeiro worldwide - an instrument not normally spoken of in the same context with American music.

Feiner has walked a fascinating road from the jazz world of Manhattan to the nightlife of Rio de Janeiro. Born in

New York City, and formally a guitarist, Feiner received a Bachelor of Music degree in Jazz Studies/Guitar at the

Hartt School of Music in Hartford, Connecticut, where he studied with the legendary saxophonist Jackie McLean.

During the early 90s he was a respected guitarist on the New York jazz scene, leading groups two nights a week at Augies (now Smoke), the world-renowned club in Manhattan known as a meeting place for New York Citys best young jazz musicians. The long list of outstanding players who performed with Feiner during that time included the pianists Brad Mehldau and Larry Goldings.

In 1999, during his first trip to Brazil, Feiner discovered the pandeiro, the instrument that would become his

passion and new means of musical expression. He moved to Rio de Janeiro in 2001 to be closer to the instrument and Brazilian music in general. As he evolved as a player, he began to play with some of Rios finest musicians in the samba and choro scene. Just a few years after his arrival in Rio, Feiner had become a respected pandeirista. However, it is Feiners innovative project, Pandeiro Jazz, that has truly set him apart. The idea was born during an informal performance in New York City in 2004 and was first documented on the CD Pandeiro Jazz, released in 2006 by the Delira Música label. It was recorded in Brooklyn with guitarist Freddie Bryant and saxophonist Joel Frahm, with bassist Joe Martin joining them on a few tracks. This CD is the first jazz recording ever made with a pandeiro as the exclusive percussive instrument, in place of a drumset.

After the success of Pandeiro Jazz, Feiner released Dois Mundos in 2008 on the respected Brazilian label Biscoito

Feldman, and bassist Alberto Continentino. It showcased more of Feiners talents as a composer, with his original

compositions making up for more than half of the tracks on the album. Dois Mundos was nominated for a 2009

Latin Grammy Award and was called one of the best CDs of the year by Playboy Magazine in Brazil.

Feiners third CD, Accents was released in 2010 on the Zoho Music label. It reunited the same group of NYC-based musicians as his first CD, Pandeiro Jazz, and further documented the growth of the project. In a review of Accents, JazzTimes magazine wrote, Feiner couldnt have made better picks, as the quartet is fully in sync from the get-

A View From Below, Feiners fourth recording, was released independently in March 2104. It highlights his

compositional skills even more so, as he penned all nine tracks on the album. It features a unique and exciting

trio format with Rafael Vernet on Fender Rhodes and Wurlitzer, and Guilherme Monteiro on electric guitar. This

CD represents a sonic departure from Feiners previous three recordings, as they were all acoustic in nature.

Downbeat magazine gave A View From Below a 4-star review, and the respected Brazilian music critic Carlos

Calado wrote in the Folha de São Paulo newspaper, "The creative freedom this trio displays while shifting between

jazz and Brazilian music is amazing."

After living in Rio de Janeiro for 13 years, Feiner returned to his hometown of New York City in April 2014. The NYC CD-release performance for A View From Below featured a new line-up: guitarist Mike Moreno and pianist organist Sam Yahel  both highly respected musicians on the international jazz scene, and both former members of Joshua Redmans Elastic Band.

When asked to define his music, Feiner is quick to point out that it is not what people refer to as Brazilian Jazz:

Brazilian Jazz has a certain type of sound associated with it, and thats definitely not what my music sounds like. People are quick to label it as Brazilian because of the presence of the pandeiro, but if you actually listen youll hear that it has a personality of its own. I use a lot of non-Brazilian rhythms.

Besides the musicians from his regular working groups, Feiner has also featured many other stellar instrumentalists from New York and Brazil such as: Mark Turner, Seamus Blake, John Ellis, Chico Pinheiro,

Hamilton de Holanda, Gabriel Grossi and Helio Alves. He has also performed alongside the legendary Brazilian

Feiner is also known for being an ambassador of the pandeiro, introducing people to the instrument around the world. A respected educator, he has given workshops in the USA, Finland, Sweden, Austria and Slovenia. In the USA, he has also given presentations on the pandeiro and Brazilian music at the Manhattan School of Music(New York, NY), Williams College (Williamstown, MA), Uarts (Philadelphia, PA) and at the Percussion Arts Society International Convention (PASIC) 2008 in Austin, Texas. He also toured Mexico as a Jazz Ambassador for the US Department of State in 2009.