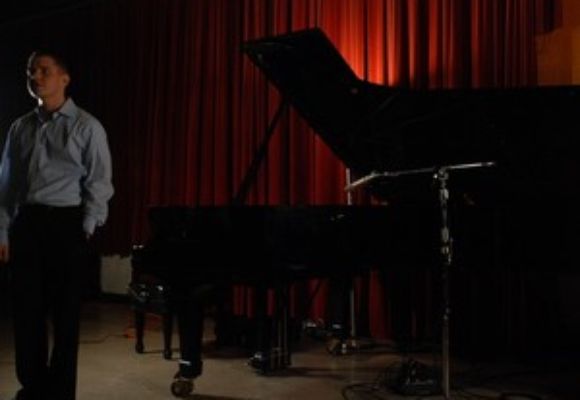 Siskind, born in 1986, hails from Irvine, California, and began playing the piano at a very young age. When his parents noticed he had a knack for picking up tunes, they enrolled him in a Yamaha piano class; was soon welcomed into the Junior Special Advanced Course, under the guidance of Suzanne Wong-Abe.

Siskind thrived in the Yamaha system, especially in the creative aspects  improvisation and composition. These strengths led to his entry into many Junior Original Concert (JOC) competitions  Yamaha events designed to showcase students performing their own pieces. Through the JOC program, Siskind found himself playing all over the country: at the Yamaha piano manufacturers in Thomaston Georgia, at the National Association of Music Merchants convention in Los Angeles, the University of Madison in Wisconsin, and other venues. Twice, Siskind was flown to Tokyo, Japan to perform his jazz-influenced pieces for Japanese audiences.

As it became increasingly apparent that he was better suited for improvising than sticking to the music, Siskind was soon introduced to jazz. His first jazz teacher was Linda Martinez, a young, enthusiastic, and brilliant composer and pianist who quickly became his mentor. Both his playing and composing quickly thrived  he won first place in the soloist competition at the Fullerton College Jazz Festival, Most Outstanding Rhythm Player in the Reno Jazz Festival, and won scholarships from the Friends of Jazz, O.C. Community Foundation Centennial Arts, and the Vail Jazz Foundation; as for his writing, he became the youngest winner of the American Society of Composers, Authors, & Publishers (ASCAP) Young Jazz Composers Awards (he traveled to New York to accept the award where he was overwhelmed to meet a personal hero, jazz legend Hank Jones).

Siskind won a sizable scholarship to the famous Eastman School of Music in Rochester, New York, to study with Harold Danko, Tony Caramia, and Bill Dobbins, among others. Siskinds excellence was quickly noticed at Eastman  he became pianist for the famed Eastman Jazz Ensemble in only his sophomore year (where hes performed with Dick Oatts, Peter Erskine, and Slide Hampton, among others), and was the only undergraduate in the award-winning group Saxology. Recognized by his peers as well as mentors, Siskind was voted the undergraduate student representative for the Eastman Jazz and Contemporary Music Department for the 2007-2008 school year. Fascinated by opportunities at Eastman outside the jazz realm, Siskind added a major in music theory to complement his jazz performance major and has pursued complex musical projects including learning to improvise in the style of Debussy Preludes, learning to improvise within the formal strictures of a fugue, and dissecting the art of the classical Fantasia form.

Siskind also got his first important teaching opportunities at Eastman  he has worked with private students as an intern in the Community Education Division (CED), directed small groups through the CED, and taught an Eastman class, Jazz Piano for Keyboard Majors. Siskind also initiated an artist-in-residency program with his alma mater, Irvine High School, in which he annually brings a group of Eastman musicians to Irvine to clinic, perform with, and inspire the schools jazz bands; the program, now entering its fourth year, has met with overwhelming success. For the past three summers, Siskind has served as staff at the Yamaha Music Camp for young composers and recently became an outside consultant doing teaching and coaching work for Yamaha.

In addition, Siskind began to attract notice outside of Eastman. He was the youngest finalist and has twice taken second place at the Kathleen T. and Philip B. Phillips Jazz Piano Competition; in 2006, he joined an incredible list including Bill Evans, Teddy Wilson, and Wynton Marsalis as a guest on the famed NPR show Marian McPartlands Piano Jazz. McPartland later honored Siskind as her choice for the first Marian McPartland Fellowship, a merit scholarship awarded to an outstanding Eastman student involved in the jazz program. In 2007, Siskind was selected as one of only five finalists nationwide in a search for the American Pianists Associations Cole Porter Fellow; the competition, located in Indianapolis, Indiana, judged by jazz piano luminaries Fred Hersch, Renee Rosnes, Denny Zeitlin and Lynne Arriale, was a phenomenal and unforgettable experience for Siskind, although the fabulous pianist Dan Tepfer was eventually named the winner.

While at Eastman, Siskind worked with Warner Brothers artist Lea DeLaria on Cape Cod, entertained at the Grand Hotel on Mackinac Island, Michigan, was invited to open for famed pianist Vijay Iyer, and gave a solo recital that raised over $2000 to benefit children in war-torn Sudan. His self-produced album Prophecy, released in 2007, featuring original music performed with trio-mates Jesse Breheney and Dave Tedeschi, has received positive press from online publications such as allaboutjazz.com, jazzreview.com, and ejazznews.com.

In February, 2008, Siskind was one of twelve applicants selected nationwide to participate in Fred Herschs Professional Training Workshop at Carnegie Hall where Siskind will study with Hersch, Jason Moran, and Kenny Barron, among others, and perform at Carnegie Halls Zankel Hall. In March 2008, Siskind and his 3-pianist group, Triple Threat, were selected to perform at the Kennedy Center in Washington D.C., where they received a standing ovation from an appreciative audience. He received a Downbeat Student Music Award for Outstanding Performance in the Best Original Song category for his composition, Little Love Song. This fall, Siskind commenced studies at Columbia University, pursuing a Masters degree in English and Comparative Literature while studying piano with guru Sophia Rosoff and studying jazz and composition with Fred Hersch.