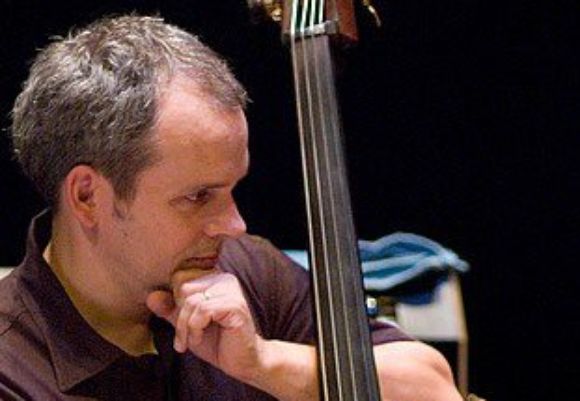 and has been featured on three discs created by the Haynes group, including the 1992 " Homecoming".

Clifford Jordan is a tenor saxophonist who many modern jazz fans will asscociate with the intense bass playing of bandleader and composer Charles Mingus.Howard,undoubtedly influenced by the latter master, as would be any jazz bassist, also cities Jordan himself as a major teacher. Howard played in Jordan's own quartet from 1983 to 1992.

It was in this context that the bassist had his first chance to record. " Dr Chicago"( Beehive records) A session that also featured pianist Jaki Byard, yet another of the Mingus alumni.

A contrasting collaboration for the bassist has been his work with an ensemble lead by saxophonist Gary Thomas. This hip hop

inspired group allowed Howard to demonstrate his musical versatility. Howard was also featured on Thomas' "Till We Have Faces"

In 2001, Howard got the chance to perform with jazz legends Herbie Hancock and Wayne Shorter. Ed performed with Mr. Hancock at the St. Lucia Jazz Festival and The San Francisco Jazz Festival with Mr. Shorter. It was during this time that the bassist was asked to share the bandstand with the legendary vocalist/pianist Shirley Horn. Howard spent three years performing with Ms. Horn, includind three recordings and many international concert dates. While playing with Ms. Horn Ed met the amazing vocalist and four time grammy nominated vocalist Karrin Allyson. Whom he continues to perform with and appears on her Concord records release " Round Midnight". Ed is also a longtime member of the great trumpeter Eddie Henderson group, of which he has appeared on nine recordings.

Currently, Ed is appearing with groups led by Karrin Allyson, Steve Wilson, Victor Lewis,, David Kikoski.  and many others.