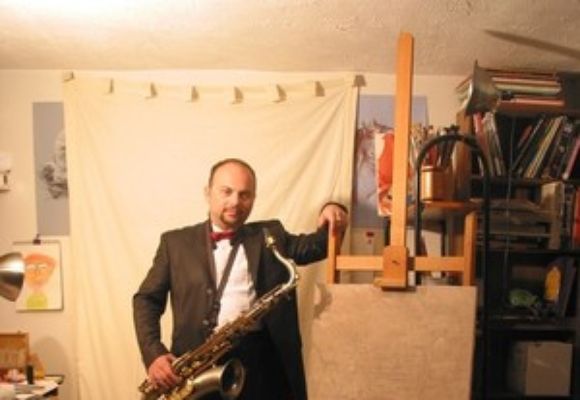 performances swept throughout Europe, is now performing in New York.

of phrase, a persuasively gentle sound and jazz allegiances, he is at

the same time a distinctive improviser." So far Yaacov excelled the

most in tenor sax, but also loves playing alt sax and flute. He's been

working regularly in the New York City Metropolitan Area, and despite of

being busy performing, he maintains a commitment to teaching and has

been invited to teach at various musical schools.

professionally in the clubs of his hometown, before relocating first

graduated from Rubin Academy in Jerusalem City, Israel, in 2000.

immersed himself in a huge variety of musical genres since then, but

Jazz has been his prime musical passion. He consumed the different

styles of Charley Parker, John Coltrane, and Thelonious Monk but put his own spin on them and was noted for a highly personal manner.

By now, Yaacov has established quite a reputation for himself on the

jazz scene with wide repertoire and experience from blues to bebop

and to salsa. In Israel, he has played with bands such as Blues Band

J.J. More, has appeared with musicians like Leonid Ptashka and Yitzhak

worked with bands of Ray Santiago and Rico Tumba, and musicians such

On the more commercial side of things, he has toured Philadelphia, PA;

Massachusetts; Atlantic City, NJ; and the NY Metripolitan area. He has led a number of small groups with young musicians and now is the first choice saxophonist for many visiting musicians.

Being an intelligent and educated musician who likes to experiment

with different variety of music, Yaacov writes his own compositions

that reflect his feelings and gives unique interpretation of the world

around him. He improvises in the endless world that is called music.