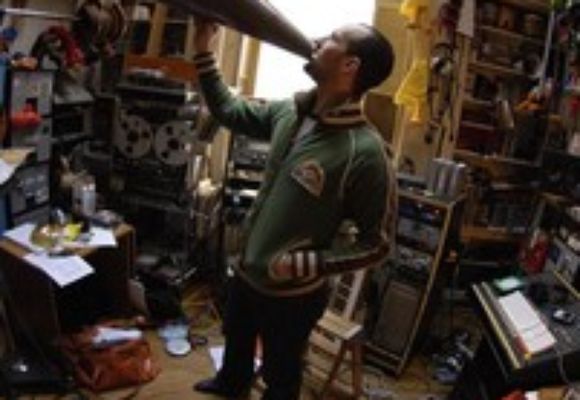 Born into a musical family, Michael Leonhart has developed into one of the most imaginative musicians of his time, sought throughout the music and entertainment world as a trumpet player, producer, multi-instrumentalist, composer, arranger and singer-songwriter. As a solo artist Michael has released six albums -- "Aardvark Poses" (1995), "Glub Glub vol. 11" (1997), and "Slow" (2002) all on the Sunnyside label (http://www.sunnysiderecords.com/); "The Suzy Lattimore EP" (2005) & "The Ballad of Minton Quigley "(2006) self released and this year's "Hotel Music" on limited edition vinyl with hand painted covers released through St. Ives (an imprint of Secretly Canadian). He has composed and performed music for movies, television, dance, fashion shows and theater, and has appeared on over 70 albums. At age 17, Michael was honored as the youngest Grammy recipient in history, cited as the most outstanding musician in a U.S. high school. That same year ABC World News named him Person of the Week. Michael has performed with Steely Dan since 1996, recording two albums with them, including 2000s Grammy winning Album of the Year Two Against Nature on which he was a featured performer, arranger and conductor. He has performed and/or recorded with such diverse artists as A Tribe Called Quest, Arif Mardin, Arto Linsday, Bill Frisell, Bobby McFerrin, Bonnie Raitt, Brian Eno, Busta Rhymes, D.J. Spooky, David Byrne, Henry Mancini, James Brown, John Barry,Joshua Redman, Mos Def, Natalie Merchant, Q-Tip, Raekwon (Wutang Clan), Slash (Guns and Roses/ Velvet Revolver), Steven Tyler (Aerosmith), Todd Rundgren, Vinicius Cantuaria and Wynton Marsalis. In 2004, Michael toured worldwide with Lenny Kravitz supporting his most recent album, Baptism. Michael is currently on tour with Steely Dan through late August 2008 while putting the finishing touches on his 7th studio record "Seahorse and the Storyteller", to be released early next year. "Hotel Music" & "The Ballad of Minton Quigley" are available on ITUNES