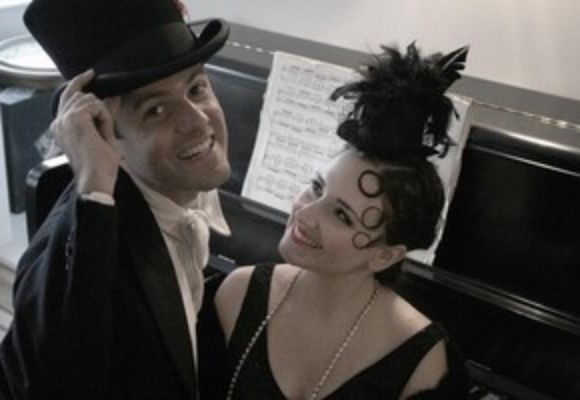 Gelber and Manning began their legendary association on the streets of Brooklyn in 1906. Gelber, a 16-year old organ-grinding street organ virtuoso was playing for pennies on the corner of Atlantic and Flatbush when a surly ruffian hurled a rotten apple at his head knocking him to the ground. Eleven minutes later, he awoke with his head in young Mannings lap. Having grown up watching Gelber from her window across the street, the aspiring singer revived him with a soothing rendition of Stephen Fosters Beautiful Dreamer. To Gelbers occasional chagrin, they have been working together ever since. Mannings sheer volume made the team a hit on Manhattans busy streets, and after a brief stint in the burlesque scene under the names Fenley and Mopsy, they began their vaudeville careers on the famous Orpheum Circuit. Their sensational music and antics took the country by storm until a bizarre weather-related incident caused their tragic disappearance. The couple made headlines, and people held vigil outside theaters across the country praying for their return. In 2007, a tornado of extraordinary girth sucked its way through the streets of Brooklyn. Though unfortunate for some homeowners, the tornado marked the happy reemergence of Gelber and Manning. The team seemed grumpy and dishevelled, but their musical and comedic abilities appeared untarnished. The rest is almost history.