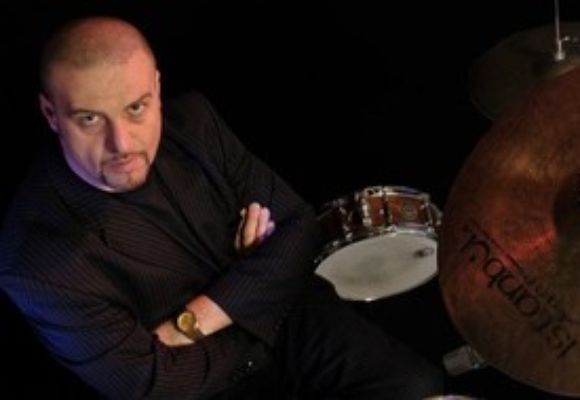 The John Farnsworth & The Fraternal Order Of Jazz

Giuseppe "Peppe"Merolla has been a musician since he was a child.

Peppe began his musical career as a drummer, singer, and actor at the age of five.Peppe performed and toured with his parents, Tina Barone and Gino Morelli, who are still professional singers and actors.The Merolla family performed in theatres and festivals throughout Italy, Canada, and the United States. With his family,Peppe recorded his first albums as a singer and a drummer as well as worked as actors on many television shows. While playing a concert in New York City,Peppe and his family were the opening act for the legendary Frank Sinatra. Mr. Sinatra was so impressed with Peppe's talent that he nicknamed him "Little Joe." At the age of 14, Zeus records signed Peppe to a three-record contract as a singer under the name of "Little Joe"

Peppe went on to record two more records with Visco Disc.Knowing that Peppe had a great talent, his parents enrolled him in the Conservatory of San Pietro A Majella in Naples, where he earned a masters degree in Classical Trumpet. As a trumpet player, he performed for two years on a national television show with the famous Claudio Simonetti Orchestra.

After receiving his degree from the conservatory, Peppe decided to pursue his love for the drums. He studied with a nationally-known Italian jazz drummer and percussionist, Walter Scotti, During this time, he began to develop a strong appreciation of jazz and was exposed to all forms of commercial music. Peppe also began developing his natural talent as a singer as well as an actor. Peppe acted in three movies. In the popular movie, Scugnizzi, Peppe not only played one of the lead characters, but also sang the movie's soundtrack. The soundtrack became nationally popular; the movie won an Italian Oscar at the International Venice Movie Festival. Singing and playing drums with his family gave him the experience and appreciation for the Italian classics. Peppe is not only at home with singing Italian classics, but has also gained recognition as a singer of contemporary music. Peppe has composed and arranged music for many singers, including his sister Anna Merolla, a well-known vocalist touring throughout Europe. At the age of eighteen, Peppe was contracted to play in the Orchestra Scarlatti of Naples as a drummer and percussionist. He toured and appeared on Rai International television with several nationally-known stars, such as: Andrea Bocelli, Eugenio Bennato, Pietra Montecorvino, Raffaella Carra, Katia Ricciarelli, and Ornella Vanoni.