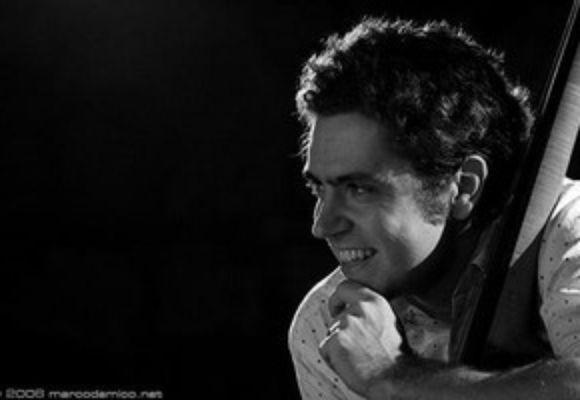 Among the most proficient and accomplished bassists in the field of contemporary jazz, Orlando le Fleming's virtuoso technique, boundless creativity and powerful beat are those of a musician who has found himself, humbly, occupying a space in the uppermost stratum of American improvised music.

Orlando's facility as an improviser and capacity as a team player were first honed not on the bandstand, nor in the practice room, but on the cricket pitch. Originally from the UK, Orlando seemed destined for an athletic career, and was briefly a professional cricketer, until he was granted a place at London’s Royal Academy of music, and his lifelong passion for music won out.

While he succeeds as a sideman, it is as a leader that Orlando le Fleming truly shines. From Brooklyn With Love is a living document of Orlando's original compositions, as performed by his 2010 quartet. Recorded in concert at storied

Park Slope hangout Freddy's, it features saxophonist Will Vinson, guitarist Lage Lund, and drummer Antonio Sanchez. Riding the high acclaim of this initial release, Lund, Vinson, and Le Fleming would go on to form the drum-less OWL Trio, whose eponymous 2013 debut was hailed by critics and listeners alike. Downbeat declared “Everything about this album,which should contend for debut of the year honors,is a resounding success. The music swings effortlessly, every utterance is gorgeous and the recording is intimate and beautiful."

"Orlando is easily one of the most skilled and thoughtful musicians that I have worked with." - Jeff "Tain" Watts

"Orlando has great ears, is a master of phrasing and note choice and knows exactly how to complement his musical surroundings; he's a pleasure to play with every time." - Ari Hoenig

“Orlando is a brilliant musician and one of my most favorite bassists. He has so many dynamic and musical qualities, his sound is big and supportive, his lines are deep architecture,his solos are dances in shadows and light, his energy is warm, engaging and playful, and his technical skill is on the highest level.” - Kurt Rosenwinkel