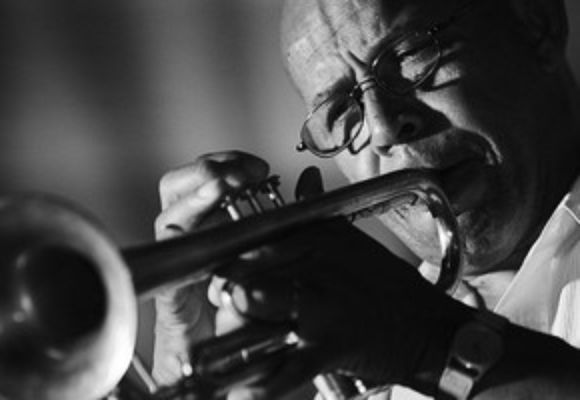 Henderson's mother was one of the dancers in the original Cotton Club. She had a twin sister, and they were called The Brown Twins. They would dance with Bill "Bojangles" Robinson and the Nicholas Brothers. In the film showing Fats Waller playing 'Ain't Misbehavin', Henderson's mother sits on the piano whilst Fats sings to her. His father sang with Billy Williams and The Charioteers a very popular singing group.

Henderson was heavily influenced by the early fusion work of jazz musician Miles Davis who was a friend of his parents. They both met in 1957 when Henderson was just 17 and played a gig together.

After his medical education, it was back to the Bay area for his medical internship and residency - and the break that thrust him fully into music. It was a weeklong gig with Herbie Hancock's Mwandishi band that led to a three-year job. The Mwandishi association lasted from 1970-73.

Ironically, he was trained to be a doctor when he permanently chose music. Henderson worked also with musicians John Handy, Tyrone Washington, and Joe Henderson, in addition to his own group. He gained some recognition for his work with the Herbie Hancock Sextet (1970-1973), although his own records (which utilized electronics) tended to be commercial. His experiences with Hancock exerted a profound influence on Henderson, as reflected in the music on his first two solo albums, Realization and Inside Out, recorded in 1972 and 1973 for Capricorn Records.

After leaving Hancock, the trumpeter worked extensively with Pharoah Sanders, Mike Nock, Norman Connors, and Art Blakey's Jazz Messengers, returning to the San Francisco Bay Area in 1975 where he joined the Latin-jazz group Azteca (band), and fronted his own bands. He also recorded with Charles Earland (popular for his version of 'Let the Music Play' in 1978).

After three years in the Air Force, Henderson enrolled at U.C. Berkeley, graduating with a B.S. in zoology in 1964. He then studied medicine at Howard University in Washington D.C., graduating in 1968. Though he undertook his residency in psychiatry, he only practiced general medicine.

He practised medicine from 1975 to 1985 in San Francisco, part-time for about four hours a day working at a small clinic. Henderson said, "The head doctor knew I was into music and he hired me with the stipulation that whenever I get tours I can go and come as I please. They would even pay me when I was gone. It was lovely", he recalled. "I just wanted to play music. But I never in my wildest dreams thought I'd ever have a chance to play with the big guys."

In the late 1970s Henderson embarked upon recording five fusion albums during the disco era that were later to be re-released. He recorded two albums on the Blue Note label 'Heritage' and 'Sunburst' as well as one for Capitol Records 'Mahal', and two for Capricorn Records'Inside Out' and 'Comin' Thru'. Their popularity was far stronger in the UK with him almost having 'star status' playing the music.

Henderson's only UK hit was the single 'Prance On' with the 'B' side called 'Cyclops' also recorded for Capitol which reached #44 in the BBC Top 75 as it was then in 1978. The newly introduced 12" vinyl single format for this track helped promote it on the disco/club scene at the time. His previous single recorded in 1977 called 'Say You Will/The Funk Surgeon' (the title of the latter being clearly influenced by his experience in medicine), also recorded on Capitol failed to chart in the UK.

'Cyclops' was an instrumental LP track only although it was so popular at the wrong speed the record label Capitol actually pressed a 12" vinyl single with the regular version and the fast version back to back.

It should be noted that the hit 'Cyclops' became famous for being played by UK DJs on the radio at the wrong speed on vinyl i.e. 45 rpm (revolutions-per-minute) rather than the correct 33 rpm. Henderson says that, whilst it didn't sound correct to him, the record received rave reviews in the clubs and discos being played at the faster speed and, ironically, this is how Henderson became well-known on the disco scene in the UK.

There is a striking similarity to Henderson's Cyclops by musician Rodney Franklin with the track called 'Stay On In The Groove' from the 1984 album called Marathon produced by bass player Stanley Clarke. This may be pure coincidence although the repeated five notes are identical on Franklin's track.

Many fusion groups in the UK have studied the musical work of Henderson and Herbie Hancock allowing them to expand their own musical vocabulary.

In the 1990s, he returned to playing acoustic hard bop touring with Billy Harper in 1991 while also working as a psychiatrist.

In the last few years Henderson has played at festivals in France and Austria. When Miles Davis died, Henderson made a recording of one of Davis' most famous tracks in May 2002 called 'So What?', a tribute to Davis that features songs associated with the legend. The group included Bob Berg on sax, Dave Kikoski on piano, Ed Howard on bass and Victor Lewis on drums.