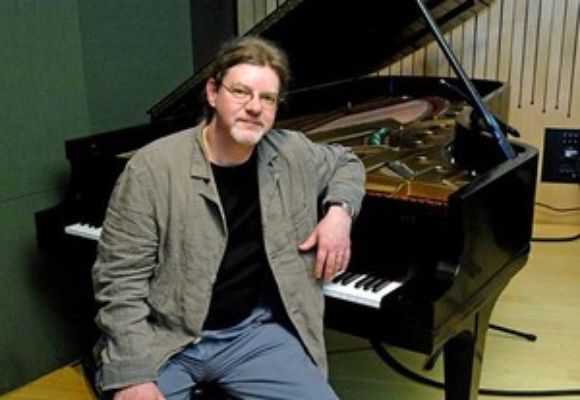 Pianist/composer Frank Kimbrough has been active on the New York jazz scene for 25 years. He is currently a Palmetto recording artist, having previously recorded as a leader for OmniTone, Soul Note, Igmod, and Mapleshade. Frank was a founding member and composer-in-residence of the Jazz Composers Collective (1992 - 2005). During the Collective's existence he played in nearly twenty of its groups, and his relationship with the musicians associated with the JCC is ongoing. He is otherwise in demand as a sideman, evidenced by recent recordings and tours with the Maria Schneider Orchestra, trumpeter Dave Ballou, and with vocalists Kendra Shank and Katie Bull. He was a member of the legendary saxophonist Dewey Redman's quartet from summer '05 until Redman's passing in Sept. '06. Frank's playing has been recognized by his inclusion in the Downbeat Critics Poll each year since 2001, and his recordings are often included in jazz critics' year's-end top-ten lists.

Kimbrough's much anticipated solo piano recording, Air, is new on the Palmetto label, and features Frank's original compositions alongside tunes by Paul Motian, Thelonious Monk, and Duke Ellington. In a recent review in The New York Times, Nate Chinen says "fittingly, rewardingly, it's a mature and personal reflection. He approaches each theme with generosity and composure. His readings of Monk's "Coming On The Hudson" and "Jackie-ing", both resplendent in tensions, hint at an elusive mastery." His 2007 solo concert at New York's Rubin Museum of Art was named among the best performances of the year by All About Jazz New York.

Frank Kimbrough's most recent trio CD is Play (Palmetto), with bassist Masa Kamaguchi and drummer Paul Motian. It features seven of Kimbrough's original compositions, along with two by Motian. In keeping with Frank's desire to make music in the most organic way possible, the recording was made with the musicians playing in the same room, without headphones, in a five-hour session with no rehearsals prior to the recording date. Since its release in May, 2006 it has been met with uniformly positive reviews, appearing on Top 10 Jazz CD lists of 2006 by critics from The Wall St. Journal, New York Newsday, and The Sydney Morning Herald, among others.

Growing up in Roxboro, NC in a musical family, Kimbrough received full support for his musical endeavors, as both of his parents and all of his siblings were musicians. He has been playing piano since before he can remember and received influential piano instruction from an early age. His foundation in classical music studies grounded him in strong technique and profoundly influenced his open musical tastes. After leaving college, he formed his first trio and set out in pursuit of real world musical opportunities, first in Chapel Hill, and then in Washington, D.C. In Washington he met Shirley Horn, who became an enthusiastic supporter and mentor. He worked there with his trio, and also shared the bandstand with Maurice Robertson, Buck Hill, Paul Horn, Anthony Braxton and Webster Young. Arriving in New York in the fall of 1981, he sought out his heroes, spending time with pianists Paul Bley and Andrew Hill, both unique artists who helped him hone his artistic identity. In 1985, he won the Great American Jazz Piano Competition at the Jacksonville Jazz Festival. On Shirley Horn's recommendation, he made his first recordings in 1986, and since then has recorded more than a dozen albums as a leader or co-leader.

Kimbrough's involvement in the Jazz Composers Collective, with its 11-year-long concert series, diverse recording projects and frequent touring, fostered several of Kimbrough's groups: trios with bassist Ben Allison and drummer Matt Wilson (Lullabluebye, on Palmetto), or Allison and Jeff Ballard (Quickening, a live JCC concert recording on OmniTone), his duo with vibraphonist Joe Locke (Saturn's Child and The Willow, both on OmniTone); and his Noumena group with saxophonist Scott Robinson, guitarist Ben Monder and drummer Tony Moreno (Noumena, also a JCC concert recording on Soul Note). Major support for Kimbrough's work as a composer has come from Meet the Composer, The Mary Flagler Cary Trust, and Chamber Music America's Doris Duke Jazz Ensembles Project. As an integral part of most of the Collective's groups, Frank continues to work closely with the other composers-in-residence, touring and recording with Ben Allison's Medicine Wheel and Peace Pipe groups; Ted Nash's Still Evolved Quintet and Double Quartet, Ron Horton's Quartet and Septet, Michael Blake's Elevated Quartet, Free Association, and Eulipion Orchestra. Besides co-leading the Herbie Nichols Project, he has participated in other Collective endeavors focusing on the music of Andrew Hill, Lucky Thompson and Lennie Tristano; and he's played on concerts and recordings by some of the Collective's guest composers including Eddie Gale, Ed Neumeister and Jon Gordon.

In 1995 Frank was awarded a Jazz Performance Fellowship by the National Endowment for the Arts for his work on Herbie Nichols' music, which he'd begun in 1985. The Jazz Composers Collective's Herbie Nichols Project, co-led by Kimbrough and Ben Allison, has toured the U.S., Canada, Brazil, France, Portugal, Wales, Netherlands, Azores, Belgium, Denmark, Sweden, and England, and its work has been documented on three critically acclaimed CDs for Soul Note and Palmetto. Kimbrough has written about Nichols' life and work for the New Grove Dictionary of Jazz, and with Ben Allison, contributed liner notes to The Complete Blue Note Recordings of Herbie Nichols.

Maria Schneider invited Kimbrough to join her orchestra in 1993, just as she began her five-year Monday night residency at Visiones in Greenwich Village. Since then, Frank has performed with the MSO in the U.S., Macao, Portugal, Germany, Austria, Spain, The Netherlands, Switzerland, Italy, France, England, Luxembourg and Finland. He is prominently featured on Schneider's Grammy-winning CD Concert In The Garden , and also appears on her three previous albums: Coming About, Days Of Wine And Roses, and Allegresse. He also appears on Sky Blue, her latest on artistShare, which was nominated for 2 Grammy awards.

Frank has made a name for himself as a supportive and inspiring educator. He was recently appointed to the Jazz Studies faculty at Juilliard, and will begin teaching there this fall. From 1996 ' 2001, he served on the adjunct faculty of New York University's Department of Performing Arts Professions, where he taught applied jazz piano, jazz piano classes, improvisation, and led two student ensembles. Residencies and workshops include the Juilliard School of Music, Paris Conservatory (with Maria Schneider), Oxford University (England) and The New School University (with the Jazz Composers Collective), Berklee College of Music, Oberlin College Conservatory of Music, Indiana State University, the University of Iowa, the University of North Florida, and the University of North Carolina at Chapel Hill, among others.