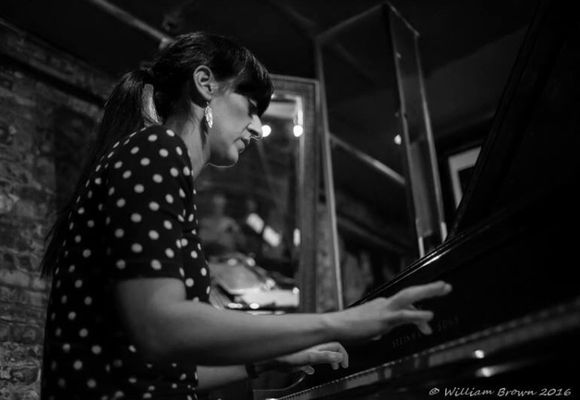 "Her composing style stays modern without ever being airless and swing-deficient, open without getting lost in harmony and sentimentality. And her soloing is special.” [Ben Ratliff – New York Times]

New York based pianist Simona Premazzi has developed an impressive body of work as a composer and bandleader. Originally from Italy, Premazzi hails from a small town in the outskirts of Milano, where she began playing piano at age 8 and a half. A gifted musician, Simona is a graduate of the conservatory of music in Udine. She followed up her studies in Milano, by enrolling in the International Academy of Music and CPM music school, studying under the incomparable supervision of two of Italy’s formidable jazz masters, Massimo Colombo and Franco D’Andrea.

As a student she became a member of two of the Academy’s most interesting bands – the Mingus Fingers Septet, of course focusing on the music of Charles Mingus, followed by a four year stint with Enrico Intra’s Big Band, touring across Italy and playing along side internationally recognized musicians including Markus Stockhausen, David Raksin, Franco Cerri, James Newton, Tiziana Ghiglioni, Dave Liebman, Eddie Daniels, Enrico Rava, Paolo Fresu and many others.

Since moving to New York in 2004, she has earned recognition for her improvisational work and skillful approach as a composer, with an unmistakable style and depth that comes across in every one of her compositions. She has shown herself to be an accomplished bandleader and much sought after collaborative partner on other artists’ musical projects. Premazzi performed in all major New York jazz venues including the historic and prestigious Village Vanguard, and jazz festivals around the US and abroad. Highlights of her musical path include a few years collaboration with Greg Osby 4 and with Jeremy Pelt 5et, sharing international stages with jazz masters Victor Lewis, Billy Drummond, Ben Allison and others.

"Ms. Premazzi’s star is on the rise, as all of Outspoken attests." [The New York Times]

"..a stellar quartet that portrays her music in the best possible light." "[Outspoken] puts forth Premazzi's most singular traits. Rather than using themes as springboards for improvisation, she probes them to get to their essence, leaving no stone unturned in the process.” [Alain Drouot - Downbeat Jazz Magazine 4 stars review]

“A distinctive voice in her own right. “Outspoken” knows its history but its restless sound continually pushes jazz forward.” [The Los Angeles Times]

Her 3rd CD “The Lucid Dreamer” (Inner Circle Music) 2013, highly reviewed on The New York Times by Ben Ratliff, features multi awarded tenor saxophonist Melissa Aldana, bassist Ameen Saleem, drummer Jochen Rueckert and special guest Greg Osby on alto and soprano saxophones. Her debut album, “Looking For An Exit” (PRE) 2007, a trio with Ari Hoenig on drums and Joe Sanders on bass, was listed among the best trio albums between 2004 and 2008 by the prestigious Japanese magazine, Jazz Hihyo. Her highly acclaimed second album “Inside In” (PRE) 2010, on which Simona expands her approach to also spoken words and keyboard sounds, features her band, “The Intruders” with Stacy Dillard on tenor saxophone, bassist Ryan Berg, drummer Rudy Royston and MC rapper Baba Israel. “The Intruders” at times expanded to a larger ensemble hosting in rotation other musicians as tenor saxophonists Wayne Escoffery and Dayna Stephens, and trumpeter Josh Evans.

"A fearless modernist composer and improviser with a deeply romantic lyricism at her core, Simona Premazzi is one of the most fascinating and creative pianists in New York today." [Hot House Jazz Magazine]